Chicago is a great city. It is, in my opinion, the most beautiful city in America. Architecture-wise it is both historic and innovative. Considering it’s built on pretty much nothing, it rises above the flatness in a majestic way. The skyline carved against the horizon. The pure blue waters of Lake Michigan extending east almost like an ocean would, as far as the eye can see.

Of course, in terms of weather, it got the worst possible draw. Sure, its polar vortex winter reputation precedes itself, but I learned the hard way that it’s not just the winters that torment its residents. Summers are intensely humid, with at times fatal heat spikes. But the worst is the unpredictability. It’ll be sunny when you walk into Trader Joe’s, and then suddenly pouring as soon as you’re trying to walk home with 2 heavy bags of groceries in each hand. Umbrellas are practically useless since the downpour ricochets from the concrete pavement, drenching you from the bottom up. And then, right when you give up and let yourself be fully soaked, right when you get into your $20 surge Uber to go but 4 blocks home, it suddenly stops. The sun comes out, lighting up the city in a glitter, taunting you with its rays.

Over the past summer, I’ve had quite a few emotional rollercoasters, and several were weather-induced. But summer in Chicago is also magical in a way. The pure joy of Chicagoans getting to spend time outside is infectious, even for the jaded, takes-the-sun-for-granted Angeleno I’ve become. The beaches of Lake Michigan are somehow such happy places compared to the collective misery of Santa Monica and Venice. As I say goodbye, as I walk one more time along the lakeshore, marveling at the architectural feats beside me, I have to say thank you, Chicago, for gifting me with a wonderfully disruptive summer. For letting me get to know you in a unique way, as a student and as a journalist. For sharing with me some of your stories, and for being a part of mine, even if just for a little while.

When I landed in O’Hare (still a giddy nostalgia-inducing airport of my childhood) in June 2019, I had no idea what I was in for, but I knew I love this city, and I knew I wouldn’t regret the opportunity to call it home for a little while. A dozen weeks and a lifetime later, I still adore this town with all my heart, and I love it a little more now that I’ve debated its merits, defended its flaws, and criticized its shortcomings. This city has always had a special place in my heart, but now I feel a little more qualified to reflect on Chicago as a city, and as a memory.

As a journalist, you see the world around you differently.

You are tuned in to minute details. You search for connections. You see stories in every interaction. Your perspective is shifted as you try to observe, to analyze, to report not just from your own view but in the context of the many other existences around you. When it’s your business to pay attention to different pockets of the city, inspiration and information comes in the most unexpected forms. For these reasons and more, I think it is a profoundly beautiful way to forge a relationship with a city, and a worthwhile perspective to adopt when you have the opportunity to spend time in any place, foreign or familiar. 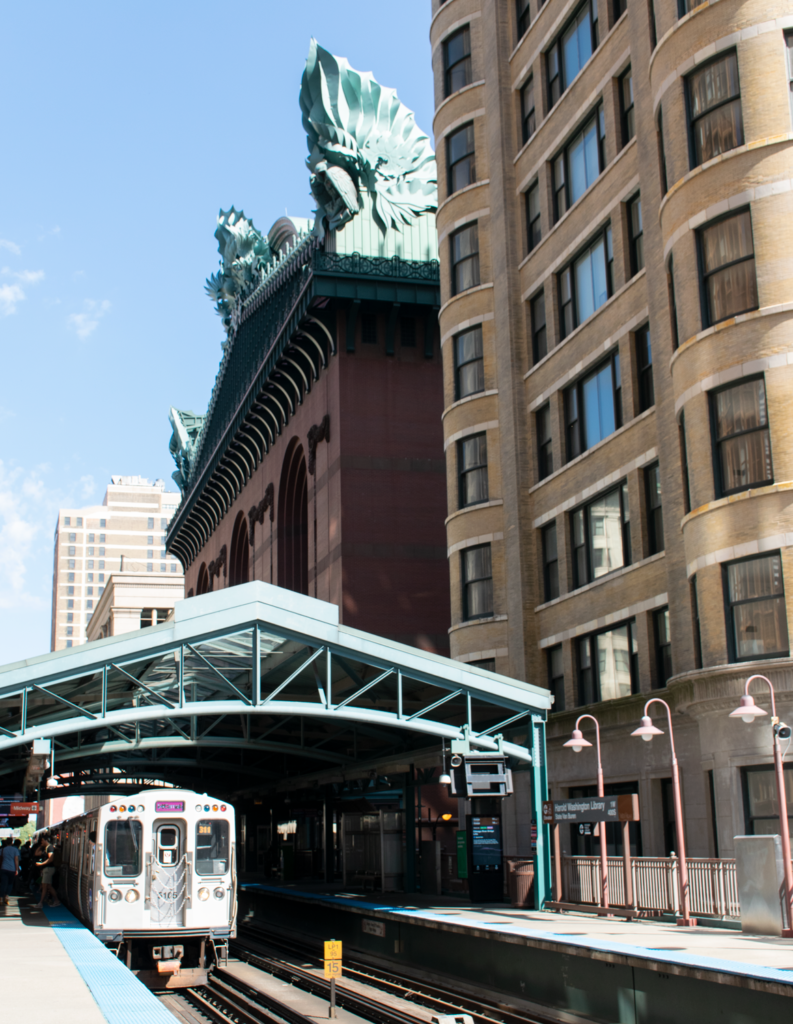 So here are a collection of notes, reflections, observations from a summer in Chicago. 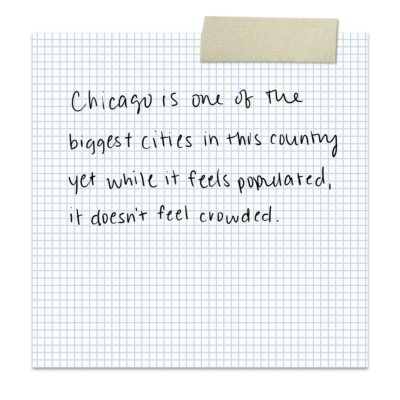 There’s space despite the urban landscape. You never feel claustrophobic. The buildings are tall, but the streets are wide, letting the sky reign (and rain) from above. Restaurants, retail, and general public space is roomy. Cafes are (extremely weirdly) relatively empty. There’s room to breathe (except maybe on the Blue line during rush hour). There are busy times and busy streets, but then you turn a corner, or just take one step outside of the most popular pockets of the city and suddenly you have a street to yourself, surrounded by storied buildings and local businesses quietly holding on to their histories. 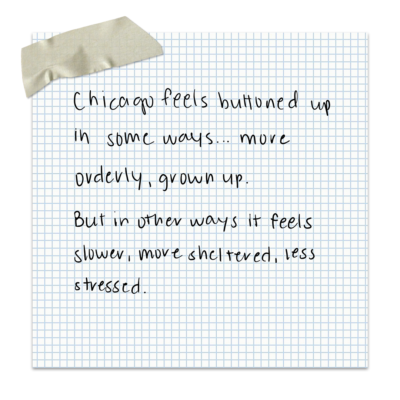 But it’s different from the laidback culture of LA. Less so in attitude, more so in lifestyle steadiness. 9 to 5 actually means 9 to 5 here. Don’t get me wrong, people definitely work here, but they work in a way that is difficult for us psychos in LA and SF and NY can’t imagine as reality. Work life balance is actually achievable because work is separate from life. Work, for most, is in the Loop. Life, for most, is north or west or south of the Loop. While work seems corporate as hell, it also draws a solid enough line for people to actually have lives too. It’s refreshing, though at times mystifying, to see people have friends, families, interests, conversation topics that are separate from work.

There’s so much less baggage in moving here than in a Californian city. But it is also so rooted in a strong sense of identity, of familiarity. True city locals are easier to come by than in LA or SF, but even the transplants share some cultural commonality. It’s safe to assume that for ever 10 transplants you meet, 6 of them will be from Wisconsin or Michigan, and the rest of them will have gone to school (or at least be dating someone who has gone to school) in a neighboring state (looking @ u Purdue). It’s in Chicago’s nature to be welcoming of its visitors, to proudly share its heritage with anyone who will listen. But underlying that warmth is a sense that the relatability has its limits, and when all’s said and done, there’s a difference between those who leave and those who stay. 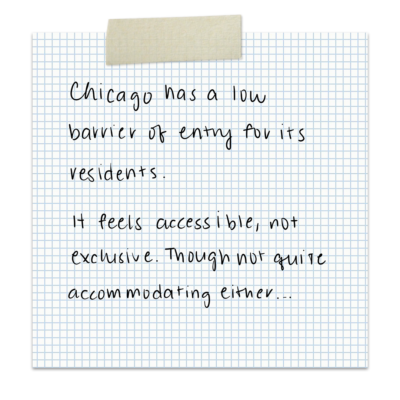 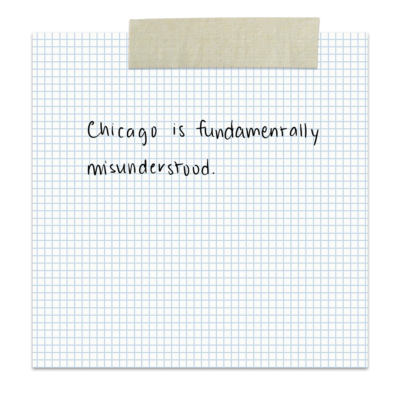 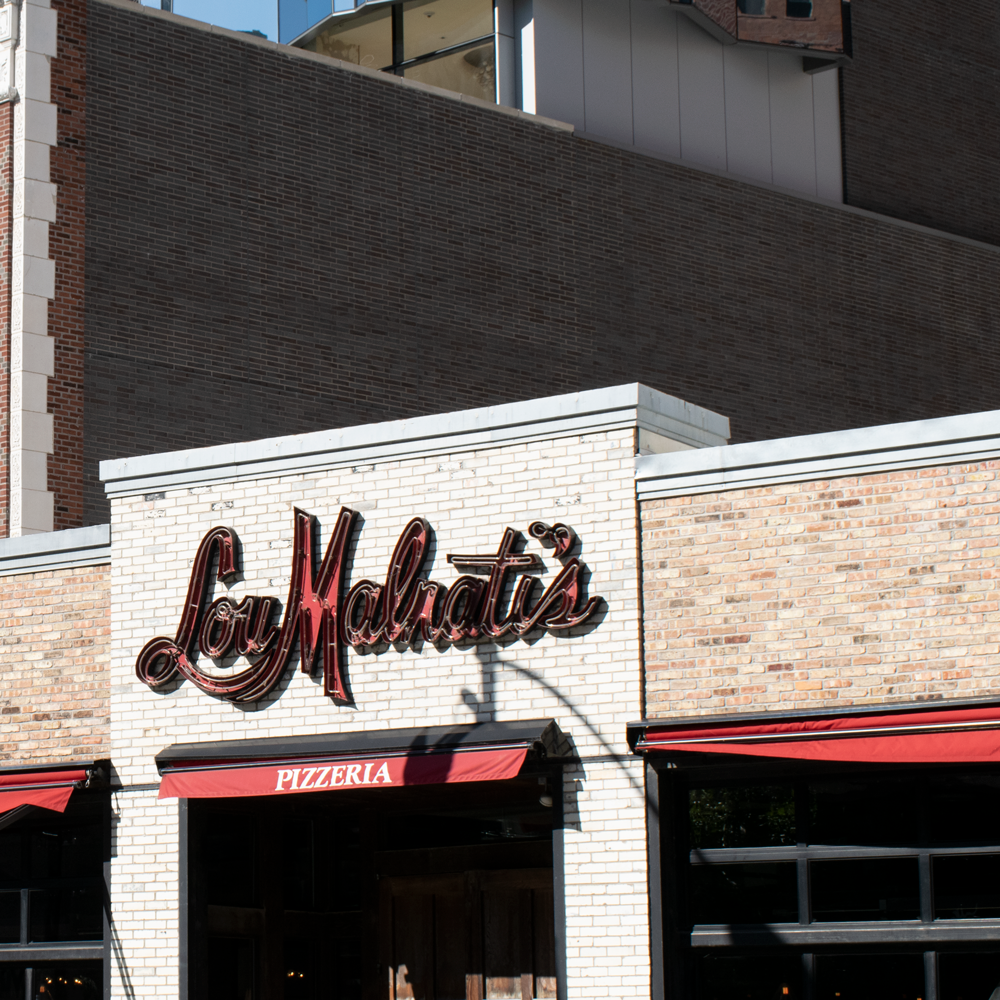 People think it’s windy because of the weather (it’s not). Foreigners think it’s cold (ok it is, but it’s also so much more than that). Coastals think it’s Midwestern (it’s actually a bit of a bubble, insulated from the rest of Middle America). Midwesterners think it’s cosmopolitan (it’s urban, sure, but still a product of its surroundings). While I wouldn’t say it’s the kind of place that is overshadowed by other’s perception of what it should be, I would say it is shrouded in mystery that few care to unravel. It’s constantly living in the shadows of coastal cities and warmer destinations, rich with culture, but so insulated by the vast prairies of Middle America that it ends up being more of a layover than a destination in the minds of travelers. But at the same time, I don’t think most travelers would get it.

Chicago is so much more than deep dish pizza and hot dogs without ketchup. It has contributed to American history in culture in ways that are too often summed up in a sentence or two, haphazardly thrown into an 8th grade history book. Chicago is more than a statistic about gun violence, printed in a bold font headline every other week. The social fabric is a lot more nuanced than articles care to acknowledge, the voices too scattered to piece together.

A dot of blue in a sea of red. A safe haven for liberals to live in the wholesome part of the country. But it’s a lot more complicated than that. Chicago is a city that is so fiercely loved, and yet so disputed. I think the Midwest is proud to have beautiful Chicago as its representative city, but also irked by its influence. Can either exist without the other? Is Chicago an island, holed up in its own existence, differentiated from its rural surroundings? Or is its jarring interruption to the flat landscape inherently integrated into the very DNA of the region? 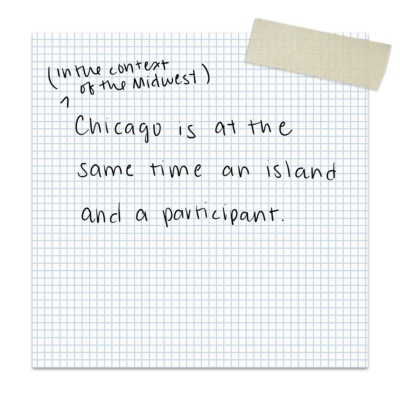 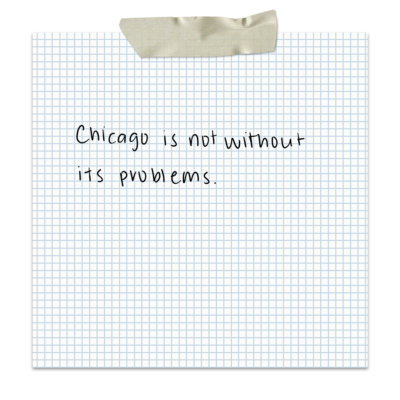 They say it’s diverse. Which, yes, I suppose in the context of the region it is. But that ignores the much larger problem, that it is one of the most segregated cities in America. That, while Chicagoans come in all shapes and colors, they have drastically different senses of space, different relationships with the city. People move through the same city streets in layers. Sometimes sharing space, but not consciously, or comfortably. It’s easy to get tucked into a familiar pocket, to not venture beyond the invisible borders of your neighborhood, or the actually quite visible border between the north and south. It’s amazing how many people stick to where they know. How many north side locals I met who had never been to Pilsen. How many Pilsen residents I met who have never even walked the streets of the neighboring Chinatown. When my normal is the mismatched patchwork of Los Angeles, Chicago becomes a snow globe to study, and difficult to communicate to those who have spent their whole lives in that snow globe.

They say it’s diverse. Which, yes, I suppose in the context of the region it is. But that ignores the much larger problem, that it is one of the most segregated cities in America. That, while Chicagoans come in all shapes and colors, they have drastically different senses of space, different relationships with the city. People move through the same city streets in layers. Sometimes sharing space, but not consciously, or comfortably. It’s easy to get tucked into a familiar pocket, to not venture beyond the invisible borders of your neighborhood, or the actually quite visible border between the north and south. It’s amazing how many people stick to where they know. How many north side locals I met who had never been to Pilsen. How many Pilsen residents I met who have never even walked the streets of the neighboring Chinatown. When my normal is the mismatched patchwork of Los Angeles, Chicago becomes a snow globe to study, and difficult to communicate to those who have spent their whole lives in that snow globe. 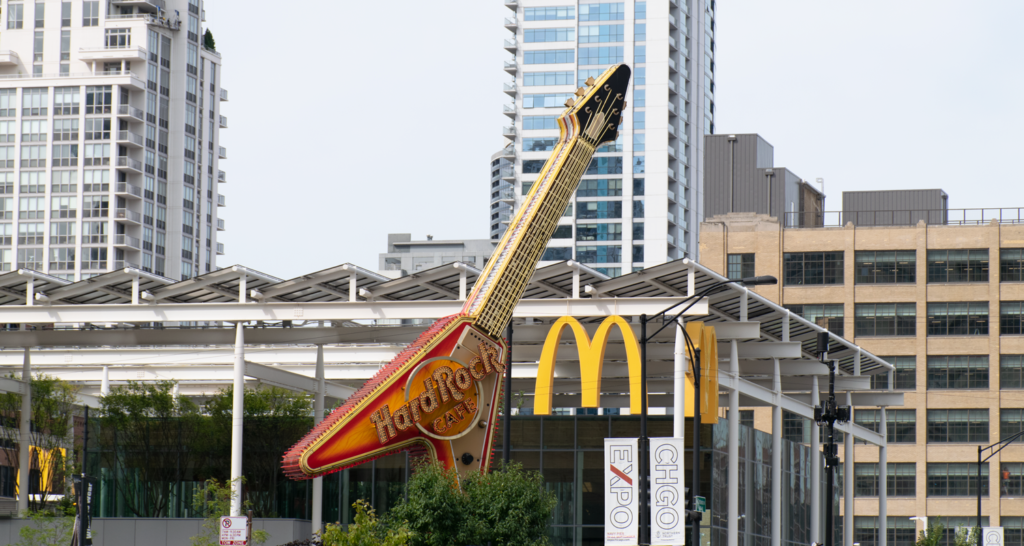 It maintains a weird small town vibe despite the skyscrapers that proudly break up the flat landscape. Chicago feels at the same time more urban than LA, yet more familiar and neighborly. There’s intrinsic genuineness even in social niceties, and interactions don’t feel overshadowed by an agenda. The weather is cold, but the people are warm. It doesn’t take much to coax out a conversation with a stranger, and a friendly face is never more than 2 Starbucks away. After all, people seem to frequent the same pockets. They all work in the same 4 buildings (seriously who doesn’t work at the Illinois Center??). I learned the hard way that there is no hiding in the city, if you get to know it, it will get to know you too, and you won’t even be able to wait for a bus without running into someone you know.

<< yes, that's a giant mcdonald's right next to a hard rock cafe, which also happens to be flanked by a rainforest cafe, not pictured. 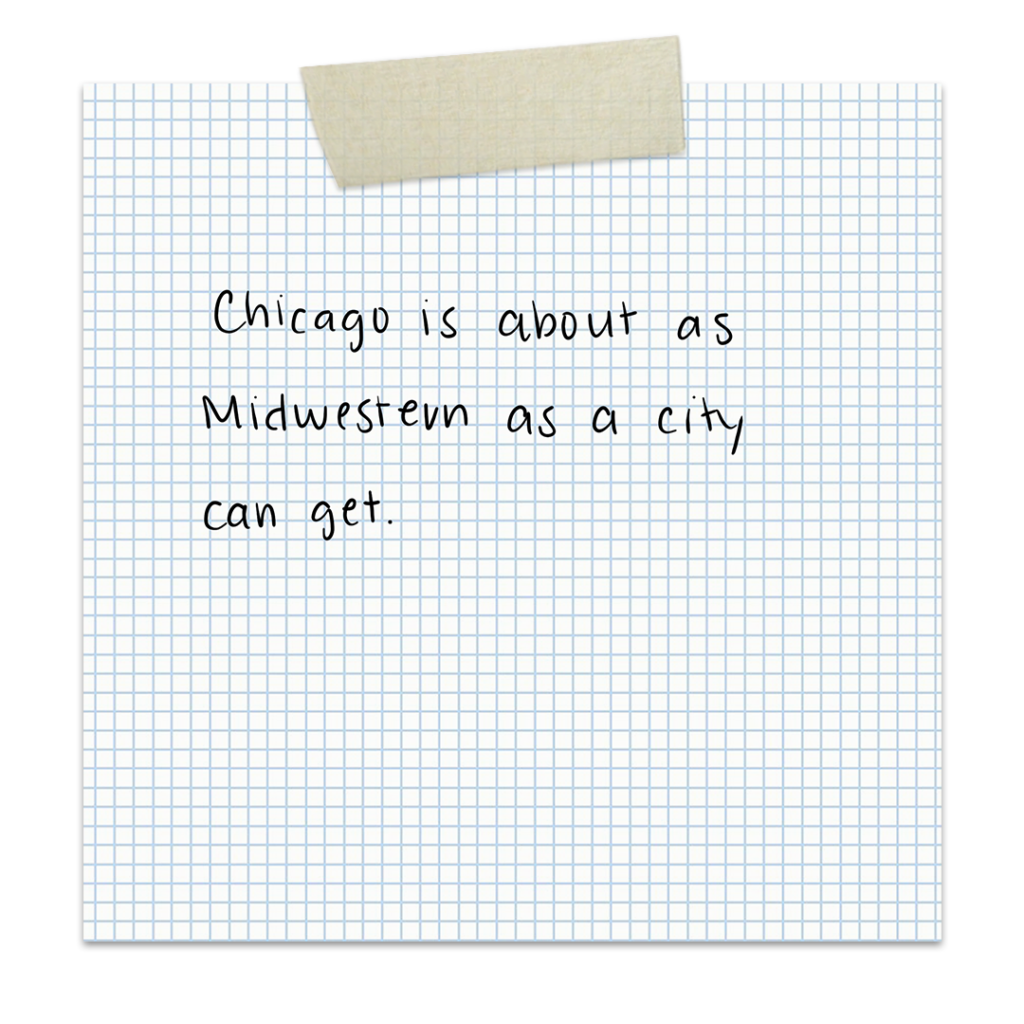 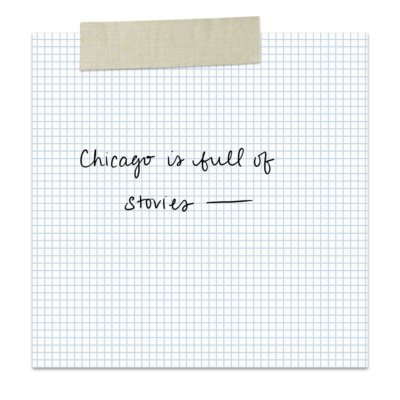 It is full of people with interesting and different stories, perspectives. Who are willing to share their life, to chat up, to connect. It’s a great place to be as a reporter because people care. People actually read the local newspaper. People actually talk to their alderman or alderwoman. People know what’s going on in their neighborhood and pay attention enough to form (strong) opinions about city happenings. After talking to a handful of people, it becomes natural to collect their personal stories and memories and map it against the broader history of the city. Just walking around, the stories are (at times literally) cemented into the walls that stand around you, if you only bother to take a closer look. 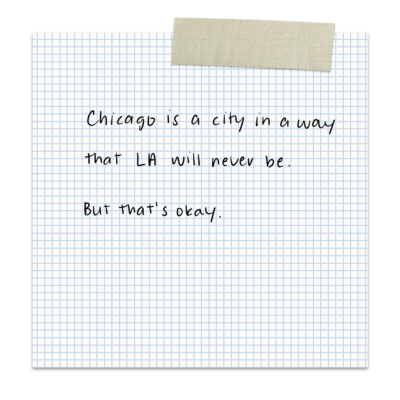 I don’t think I could ever move here permanently. But because of that, it’ll always be this magical place in my mind. Sacred in its separation from what is real to me, relieved from the burden of reality, responsibility. Chicago will always carry such sweet memories. It’s never really a goodbye. I’ll be back.