the four walls within which i exist these days

When I was first moving to New York City, I got a lot of intel and advice from friends who had once called this city home. Talk to strangers, meet new people, find your people. Avoid the L train when possible. Steer clear of empty subway cars, they’re empty for a reason. Be prepared to live in a hole, but it won’t matter because you’ll spend your life outside of it anyways. Leave at least one pair of shoes at work. Brace yourself for an unpleasant adjustment from the beautifully sunny “winters” of LA to a wet one in New York. And brace yourself for sweaty crowded subways during the hot and humid summer.

And boy oh boy was I not prepared for what New York actually had in store for me. Thankfully, I started off with a short sublet, and kind of got the feeling that COVID restrictions would be sticking around for a while by the time I found my longer term place. After jumping from place to place, trying to grow accustomed to this new city, and this new way of life, it was good to finally get settled in. To own furniture. To own things that don’t fit inside one and a half suitcases.

I moved into this apartment in May. It was already furnished, minus my room, which made it easy to get settled in (considering up to then I literally had my one and a half suitcases full of, well, clothes I thought I’d need for the office job I thought I had when I packed in February). And a couple months later, I finally feel settled, or as settled as I can be all things considered.

My favorite thing about this apartment is all of the natural light. The unit spans the length of the building, so the living space faces east (truly amazing morning light), and the bedrooms face west (amazing golden glow in the evenings). It’s funny now, thinking back on what New York City life was supposed to be like (constant movement, constant bustle), and what it’s actually been (eerie quiet, mundane days spent in confinement). I’m thankful to have a space that is comfortable and doesn’t make me feel claustrophobic. Also, with the few things I own, I’ve adopted minimalism out of practicality in my day to day existence. Probably for the better, to give some clean space as a haven from the chaos beyond. My apartment is a 2 bedroom, 1 bathroom in Williamsburg, Brooklyn. The front door, or rather, the elevator, opens up to the living space with large, east-facing windows on one side of the living room, and a spacious counter (not really an island, more of a peninsula ha)  dividing the living room from the kitchen. There’s no room for a dining table, but the counter and coffee table suffice.

From there, a hallway leads back to the bedrooms on the west side, with the bathroom along the way. Overall, the flow of the apartment makes a lot of sense. It isn’t big, but the configuration of the rooms aren’t awkward. And the high ceilings and windows make it feel more spacious than it is.

It’s a new(er) building with updated finishes. Not a ton of style, but a solid, contemporary canvas. Compared to the narrow kitchens with over-painted 1960s cabinets of LA, this open format and modern finishes are more than I can ask for. I always joke that I live in a lightbox. White walls, absurdly high ceilings, constantly flooded with light. It probably helps my circadian rhythm these days, when all the hours blend in together, my body naturally wakes up before 8am each morning with the light. 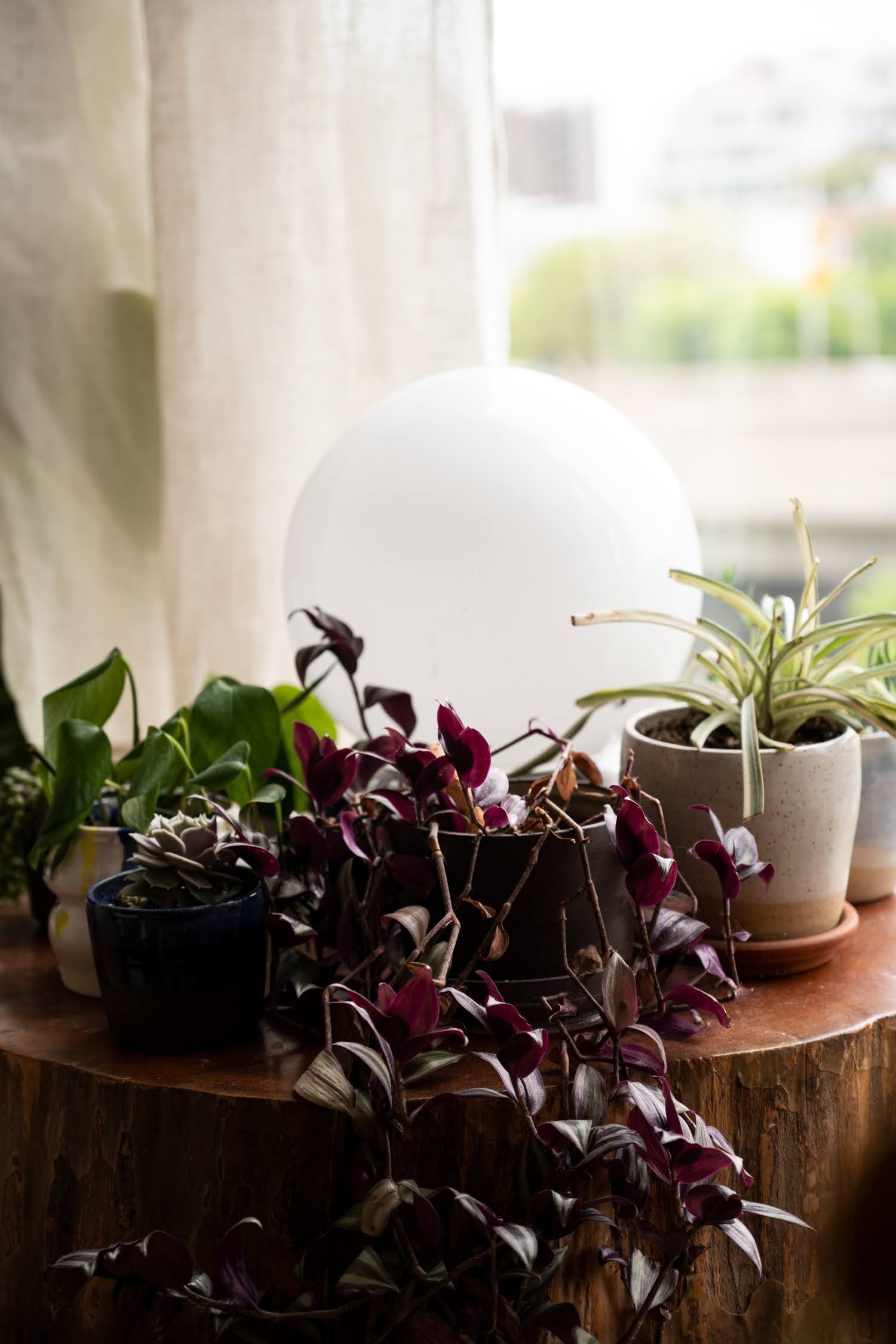 My bedroom isn’t particularly large, but it’s enough to function as my resting space and my, well, office space. These days, my office is approximately 1 yoga mat width away from my bed. All that fuss about apartment hunting along the right lines for an easy commute. This is the easiest commute ever.

sometimes it helps to pretend I have a private corner office. and suddenly my bedroom feels luxurious

The biggest purchase I made since quarantine, the one investment I made for my living space, was my desk. A simple modular piece from Inside Weather that is spacious enough for me to work comfortably, but compact enough to fit neatly into my room. Pretty much everything else I purchased was more on the practical side than the aesthetic side.

When I was planning my move, I had big plans and ambitions to create a space inspired by mid-century / scandinavian / japanese minimalism styles, curating quality pieces and building out an adult apartment. But all that went out the door because at the end of the day, with this amount of uncertainty, it’s function over form. In the end, the most valuable part of my space, the one I appreciate every day, is the natural light. Without it, I think I’d go crazy spending day after day cooped up in here. really going for the less is more kind of lifestyle these days, but still a sanctuary Considering I don’t have much stuff, storage wasn’t really an issue. But I did want to make sure that everything had its place, and avoid clutter with strategic organization. I mounted acrylic shelves to house all make up and such (or the small subset of my collection that made it over to NYC). Rather than go for a full sized night stand, I went for this bamboo tray mounted by my bed to save space while holding all the things you want to have within reach when you’re already cozied up in bed. a few of my favorite things

There’s always those glamorous photos of a bedroom that overlooks the city beyond. Perched up among the buildings in the midst of the concrete jungle. I’ll admit that for a moment I got swept up in that city life vision. But that requires living in a high rise in midtown, which… is not particularly appealing. Especially now. So anyways, not much of a view, but I do get excellent golden hour lighting.

Speaking of lighting, the only light in my room is literally a bare lightbulb in the center of the ceiling. I haven’t quite figured out what I want to do with that (granted, I don’t really need lights until after 8pm these days), so I got my priorities straight and hung up some globe lights that are voice activated so I can just tell Alexa to turn it on and off. For now, this is home. 24/7. Maybe over the next few months I’ll be able to add to it. Maybe I’ll be able to actually move my things from California. Or maybe I’ll just continue to exist like this. And hey, it’s not to shabby.