It was a strange month, but here we are entering month 7 of quarantine. Things are feeling settled, a little too normalized to be honest. Reality has fully sunk in and it’s getting hard to remember what used to be outside of nostalgic memories that feel so far away. But here’s what’s kept me through this month.

For me, this month was all about nostalgia. Reuniting and reacquainting with things from a previous life, chapters that feel so far away from the present. It started with Taylor Swift. Her new album is the first one I actually listened to in full since college, since 1989. I grew up on Taylor Swift music, memories from middle school, high school, college, captured within the lyrics and catchy tunes. Nostalgia for the days singing in my childhood bedroom, for the nights blasting music with the windows down, driving through Los Angeles.

I hadn’t listened to her past couple of albums, and only know of a couple songs on each. Of course, this in part is because these last two albums coincided with a shift in my own consumption habits, namely, I stopped listening to music in favor of podcasts. It was post-2016 and I had shit to pay attention to. But going back, one song from her last album managed to make it into a playlist: Cornelia Street. The street where it all began. The street I landed on 6 months ago, on a cold Thursday night in February. 25 Cornelia Street was my first address in New York City. Sure it was short lived, but it still remains the only place in New York where I got to experience some semblance of New York before the city shut down. One door down from Taylor’s much more regal door, where every day a walking tour would stop by. The dramatic teenager in me wonders if I’ll ever walk Cornelia Street again.

August was also the month I finally bit the bullet and flew back across the country, to sunny sunny California, for the first time since moving to New York. When I first moved, I had planned on returning for Mother’s Day, and then again in July to move more stuff. Of course, the world had different plans for me, so I landed in a very different, very hot Los Angeles in mid-August instead. It’s weird, yet refreshing, familiar but also sad. Very different from New York. And very, very hot. As in, record-breaking heat waves (seriously I always knew Woodland Hills was hell, but 121 degrees???), power outages across the state, wildfires, lightning storms, fire tornadoes and more. You’d think it would have burned off COVID by now.

Being with family is interesting. It feels familiar and comforting until you realize that it’s not the same as before because you’re quarantining, not just spending time together. The added space helps, but even so, it’s been a weird few weeks co-working with my brother (who works for a start-up data company in SF) and my dad (who works for a biotech company in the suburbs) while my mom orders Asian groceries to be delivered to our door and picks up Taiwanese food driven up by businesses all the way from Rowland Heights and San Gabriel. After existing for so long in my own bubble, it’s taken a bit of adjustment to get used to existing with 3 other people on different schedules. Speaking of schedules, working east coast hours on the west coast is not fun when you have to work 12 – 15 hour days. even a pandemic can’t stop me from my food-first tendencies: ordered ahead and picked up the essentials on the way home from LAX

Maybe it’s because of the heat, but I don’t think I’ll make it to east LA this trip. It might be for the better. It’d break my heart to see which of my favorite spots have closed. I want to preserve my favorite part of LA as a pristine, pre-COVID oasis in my memory.

But I have been able to go down to West LA a few times, and so much has changed. Westwood has a bunch of new buildings that make my old neighborhood almost unrecognizable. There are dozens of new businesses popping up (I mean, they’re opening a Meet Fresh where I used to buy course readers… and then a 99 Ranch in the former Ross space??). Even on campus there are a handful of buildings I swear I’ve never seen.

Speaking of UCLA, this campus is beautiful as ever. The west side doesn’t have a ton of green space (beyond cemeteries and golf courses), so UCLA’s hilly campus has turned into a public park, basking in the golden glow of LA’s sunshine with old trees providing shade throughout the grass. I miss UCLA. More than ever before. Maybe it’s just general nostalgia for a different time. A time where my worries were simpler, where I spent my days running from one place to the next, where friends were but a call or text or pop into the newsroom away. Thankfully one thing remains the same. Bella Pita and their brush script font choice. For the record, this is the only establishment allowed to use that atrocious font. The mini salad and sauces bar has been replaced with neatly packaged personal-sized containers of everything from their VERY spicy sauce to their hummus and cucumber salad. Nothing brings me back to the good ol days than a chicken wowshi and fried cauliflower. Please give them a visit and tip well so they survive. Speaking of businesses that I need to survive, if you’re in LA, may I recommend the following:

PS: if you haven’t used these delivery apps yet:
Postmates: use code JTHVU for $25 in credit
Grubhub: sign up here for $10 off
UberEats: use code easts-lesliey482ue for $7 off

When I first moved to New York, everyone was like, “aren’t you so excited to not have to drive anymore?” Sure, it’s convenient to be able to have a 24/7 subway system to get you around the city but: 1) New York subways even during COVID times are still filthy compared to Asia, 2) You don’t get service down there and 3) I just like my space ok I like cars.

I’m not even big on cars or driving, but I don’t mind driving and I like the freedom of feeling I can get anywhere. Traffic is easy to get use to, plan around, and use for catching up on podcasts. Parking is never that bad if you know what you’re doing. And to be able to extend my radius of existence beyond 2 miles of walking distance? Priceless.

So anyways, it’s been fun reuniting with my little car. For a while I had an irrational fear that I’d forget how to drive, or not be aggressive enough to efficiently navigate LA, but I guess muscle memory really does it, and the streets are pretty much ingrained into my brain by now. It’s been nice to have an air-conditioned portable space where you can take your mask off, roll down the windows, blast some music and speed along the freeways. Plus, the silver linings of a global pandemic mean easy parking, relaxed parking enforcement and little traffic. for the record, you’re only working in LA if you’re pulled over on some random side street with the windows down, hotspot on and laptop balanced on the passenger seat.

the new normal in LA

It’s been weird seeing COVID LA. For the past few months, LA has been my baseline for normal. For what happened before everything happened. I never really got to know New York in that way, so I didn’t have to mourn the city. But seeing it happen to LA really breaks my heart. Sure, it’s not as stark as Times Square being empty, but any true Angeleno can tell you it’s pretty damn weird to see a park full of people (even masks aside), and pedestrians walking along the street in Los Angeles.

Thankfully with cars, I was able to drive around and visit some spots (including a nice detour along the beach in Venice which I’ll be honest, had an alarming number of people). Given all the restrictions, I had to be strategic about where I went, but was able to bring back some favorites for brunch (and a 4pm snack time) at home: Gjusta bread, Artelice Patisserie, and even a new one, Bianca at the Platform. 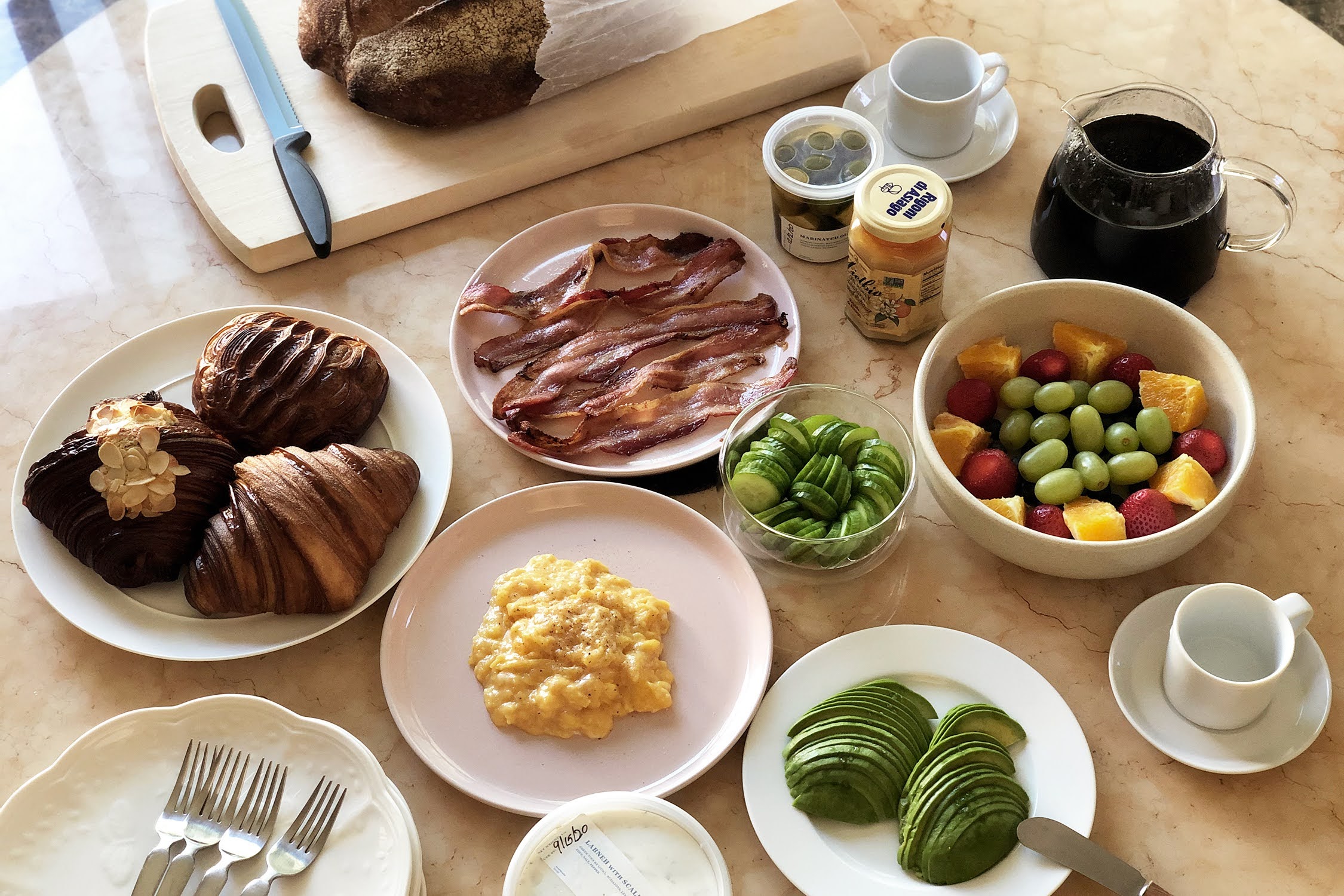 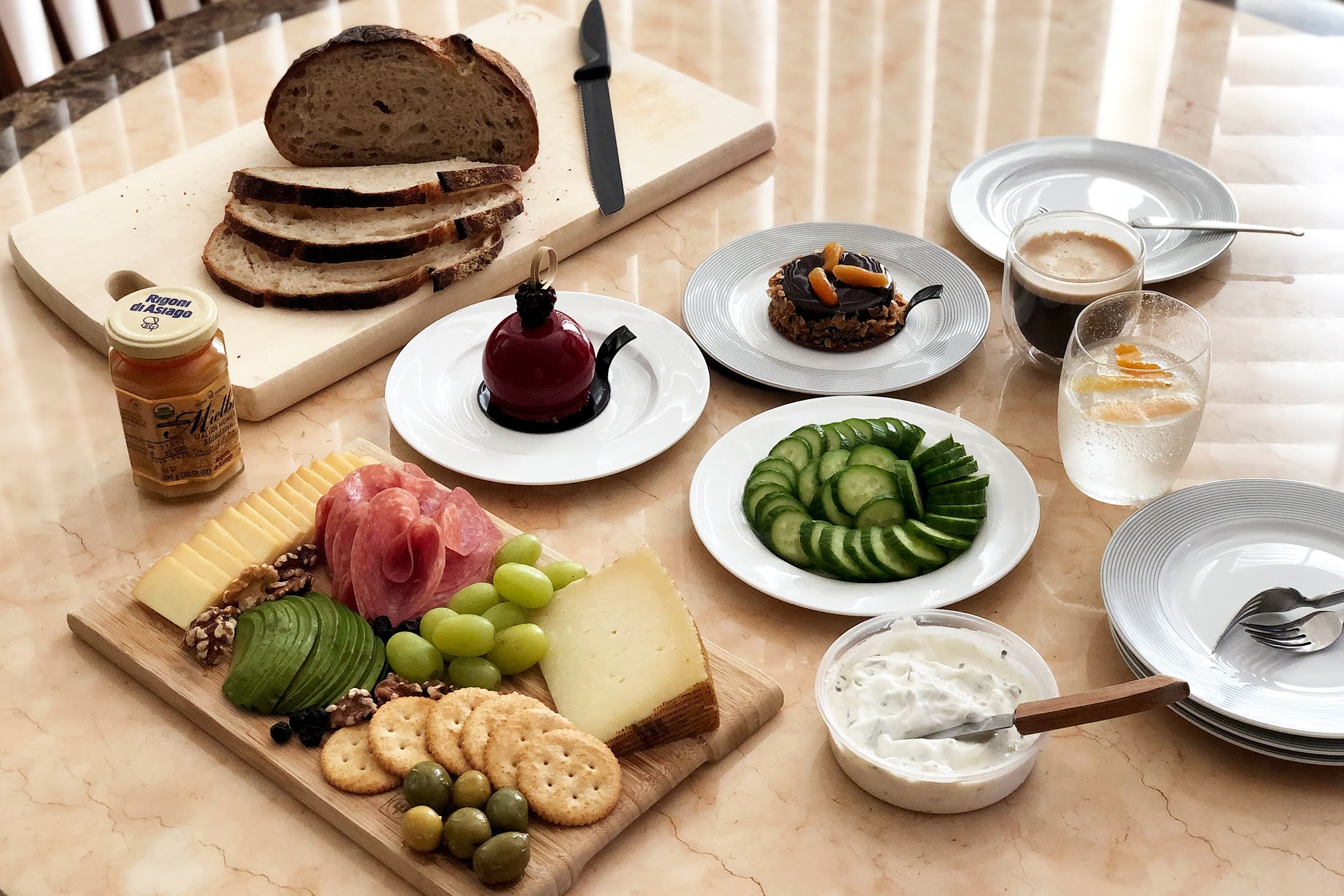 bread, olives and labneh from Gjusta, cakes and croissants from Artelice

PS: I LOVE YOU

The last place I stopped by before leaving for New York. The place I would always stop by on the way to or from LAX. The place that feels more representative of my college years than even Westwood. I’m happy to see it still surviving. Tents up, diners collecting bags of food from each of their favorite stops. A magical time where it’s actually easy to find parking.

I love you Sawtelle. Always have, always will. Stay safe.

So I figured at some point I should probably stop quarantine cooking and eating. But I still obsessed over food and the food experience. So I ended up with this: the second volume of my food culture zine: Nourish. This volume, the theme was survival. It was something I had planned to write about since late last year, but evidently has become even more relevant as the year goes on. Pre-orders are open now.