a guide to the cozy heart of Taipei

Today it’s one of the most established parts of the city. It encompasses the “central” train station, Taipei Main Station, which today connects it to every part of Taipei, and every region of Taiwan by rail. t’s also the political center of Taiwan, home to the executive, legislative and judicial offices, as well as all the ministries, the National Bank, National Post, and other government buildings. Culturally, it is home to important historical sites such as CKS Memorial Hall, the National Taiwan Museum, and 228 Peace Memorial Park. But this guide will be focusing on the area around CKS Memorial Hall, the homey part of the district, a sharp contrast from the bustling activity by Taipei Main. Most of the people who live here have been around for a while. Housing prices have skyrocketed over the last few decades, so younger people can’t really afford to move in. There are a lot of older people and families. It wakes up early and is pretty quiet at night. It’s very residential, but the boulevards are very commercial.

This district is the place to find an excellent traditional breakfast or hole-in-wall noodle shop. It’s a great place to catch up at a cute coffee shop, or go on a walk in the park. It’s a neighborhood that isn’t immune to change, but a lot of the buildings and businesses have been around for generations. New complexes are built alongside old houses in the alleys. International chain stores are situated between family owned hole-in-walls. In the streets and alleys near CKS Memorial Hall, you immediately get a sense of who is home and who is visiting. After all, no visit to Taipei is complete without an obligatory stop by the iconic monument.

CKS Memorial Hall was one of the original MRT stations, and a transfer station at that too. It’s accessible by the red and green lines and there are 7 different exits so you can get exactly where you need. There is also pretty good bus coverage, along Luosifu Road, Aiguo East Road, Zhongshan South Road and Xinyi Road (though that’s on the other side of the park). There are also several buses that go on Nanchang Road. 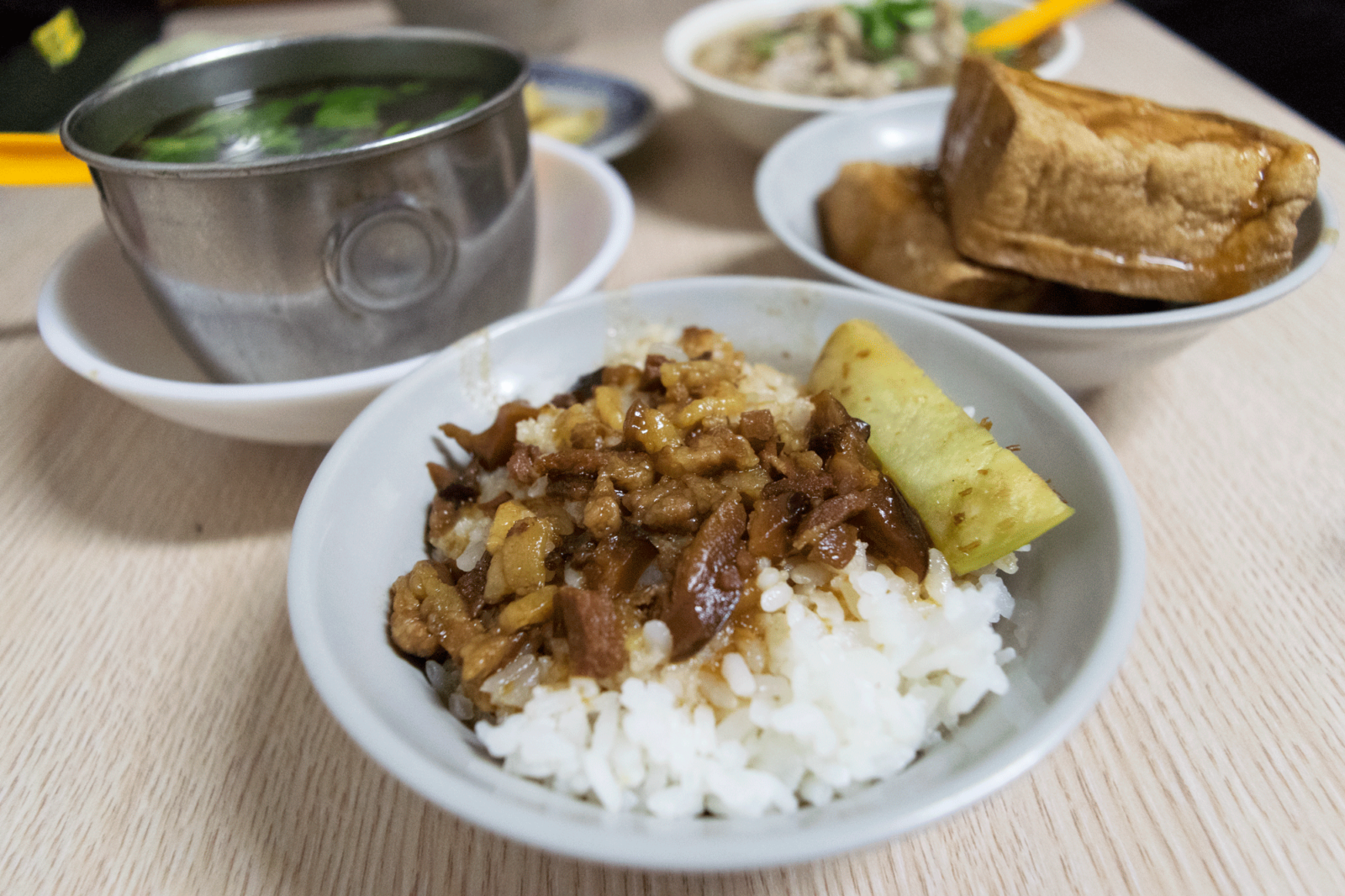 Take Exit 2 or 3. As a long time residential neighborhood and a lot of commuters, this neighborhood has no shortage of breakfast options. There’s the traditional Ding Yuan, where you can get very good versions of all the classic hits (get the scallion bing with egg, and get there on the early side — the line goes fast but so do the goods). For traditional pastries, go to Lao Yi Ji. It’s a step up from a street vendor, situated in an open storefront. For savory get the xie ke huang (scallion-filled), for sweet get the tang su bing (malt sugar filled). If you’re looking for a Taiwanese version of a breakfast sandwich, go to KSS. Or if you like your breakfast more lunch-y, go to Jin Feng for braised pork rice aka lu rou fan (plus, less of a line if you beat the lunch rush). 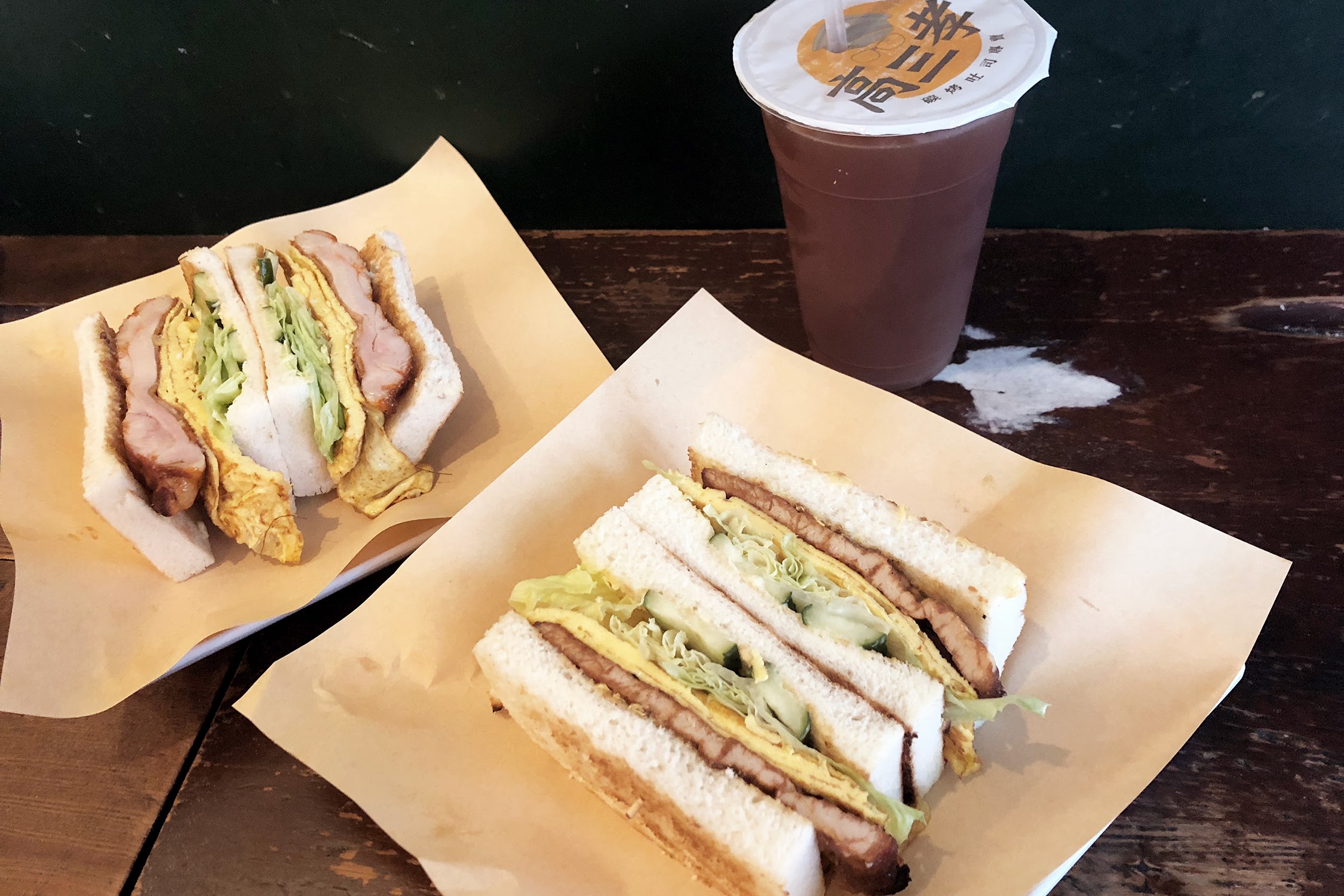 This public monument is a lot more than a tourist attraction. For the tourists, it’s an iconic photo. For the locals, it’s a beautiful public park and cultural center, a venue for many events throughout the year. The blue-topped memorial was built in the 1970s to commemorate Chiang Kai Shek (aka Jiang Zhong Zheng) the first president of the Republic of China.

Like many political things, it’s been rife with controversy over the years, but one thing that everyone agrees on is the value of the park and monument grounds as a well-maintained public space for city dwellers. Whether its a daily walk, gathering with families so the kids can play, attending an event at the National Concert Hall or National Theater or checking out the exhibition programming, there’s plenty to do. But for now, just do the basics. Walking up to the park, enter through the side gate by Aiguo East Road. Go first to the memorial itself. If it’s the top of the hour, watch the guard change by the statue. Check out the public gallery inside, maybe send a post card souvenir, and then head out to the grounds.

Take your time walking through the garden pathways. Be sure to stop by the picturesque ponds, take in the sounds of nature and pretend you’re not in the middle of a big city. Then walk toward the National Theater and National Concert Hall. There isn’t much to it if you’re not attending an event, but it’s nice to duck in and see the memorial from a different perspective on the terrace. Then, for your obligatory photo, walk back towards the monument from Liberty Square. Nanmen market is one of the many traditional markets around the city. It’s been around for decades, serving the neighborhood and being a hub for locals and visitors alike around holidays. This has always been one of the nicer, indoor, air conditioned markets. In addition to the wet market and produce, there are dozens of famed food and specialty stalls that range from homestyle dishes to specialty snacks to traditional holiday goods during Lunar New Year. They also have a very popular food court with a variety of cheap eats. 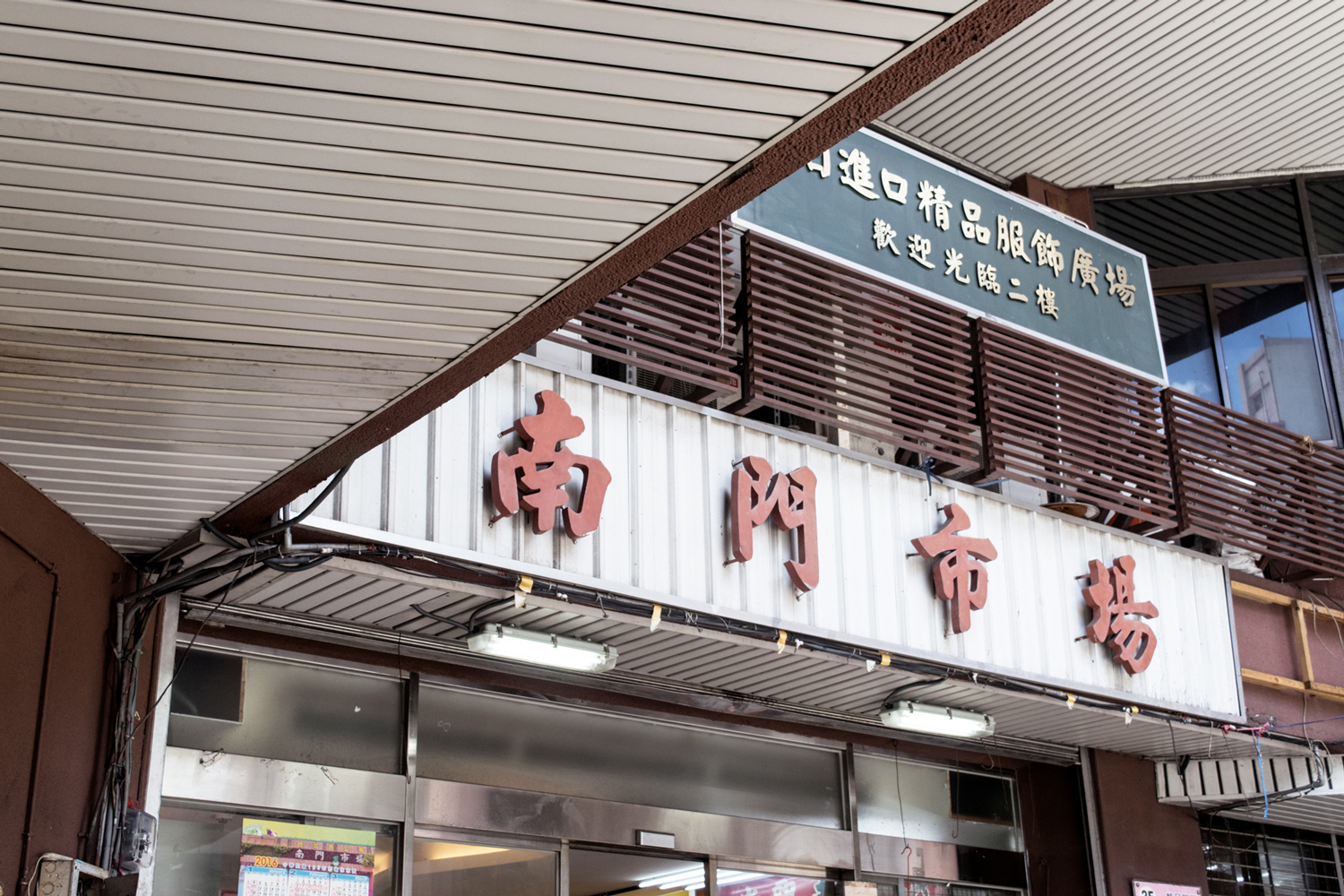 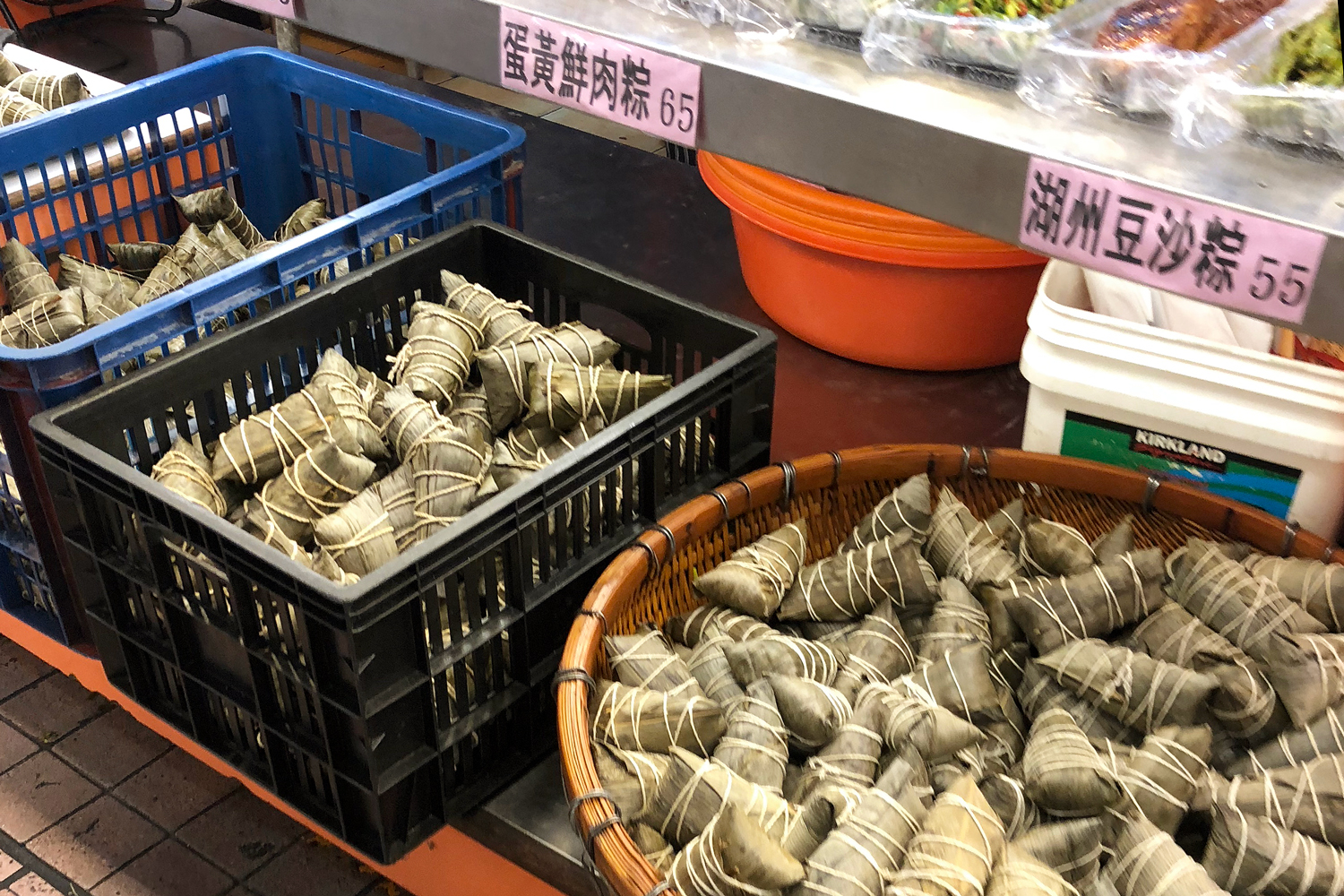 For most of its history, Nanmen market existed on the corner of Luosifu Road and Nanhai Road, right where the escalator from exit 2 drops you off. Over the years, its gone through a few renovations and reconfigurations. In 2019, they temporarily relocated to the corner of Aiguo East Road and Hangzhou South Road, right behind the memorial, as the original location gets a full re-build into a modern complex. They plan to move back in 2023.

While you’re here, let your eyes and nose guide you. If there is bustling activity around a vendor, you should probably check it out. Kuai Che pork jerky is a popular snack, and Li Jia is a popular choice for zongzi (bamboo leaf steamed rice) during the Dragon Boat Festival.

There are plenty of unpretentious lunch options in the area that will hit the spot and only set you back 100-200 NT ($3-6).

If you’re with a group, have time for a wait and are craving soup dumplings, go to Hangzhou Xiaolongbao, which claims to have Din Tai Fung taste with night market prices. It’s extremely popular but definitely lives up to its reputation.

For more of a low key, homey and fast food option, go to Qifu Bianshi. This women-run “quick service” style shop specializes in wontons and noodles. Everything is made with clean ingredients and service is fast. For a set meal, go to Sole Mediterraneo. Random name aside, this is a reliable family choice for everyday Taiwanese and Japanese food, with set meals that check the boxes on meats, veg and rice.

For some old school hole-in-wall beef noodle soup, go to Lao Zhang, which also has a more bougie version in Dong Men, but this is the original location.

For shabu shabu go to Yang Guo, a very popular local chain for individual hot pots that are very customizable and fairly priced.

After lunch, take a moment for coffee. The cafes here are much less scene-y than the ones in Dong Men or Zhong Shan or Da An. For a quick stop by, go to Tiger’s Coffee. For a trendier option go to Cafe de Gear. For a small local roaster go to Bai Pang Cafe. For a work session, go to No7. Coffee. For a more bookstore vibe, go to Elsewhere Cafe. Or maybe pick up some Jen Ju Dan brown sugar boba instead.

And before you go, stop by Chi Rou Hu Jiao Bing, a corner shop specializing in pork pepper buns and baked sweet potato. It’s the kind of place where the marquee sign functions both as the store sign and the menu and the specials advert. 35 NT, buy 10 get one free. Grab one, or ten and make your merry way. 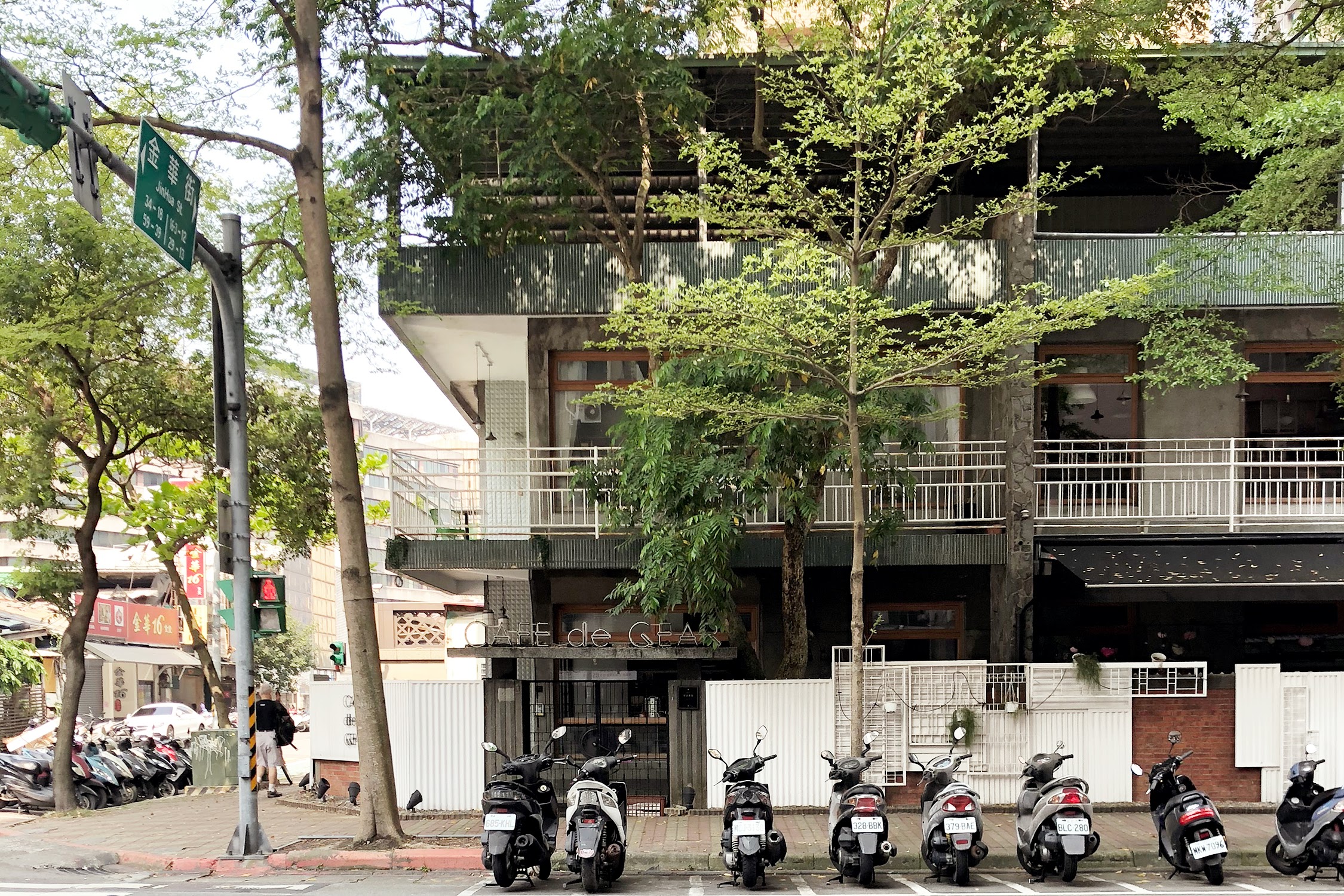 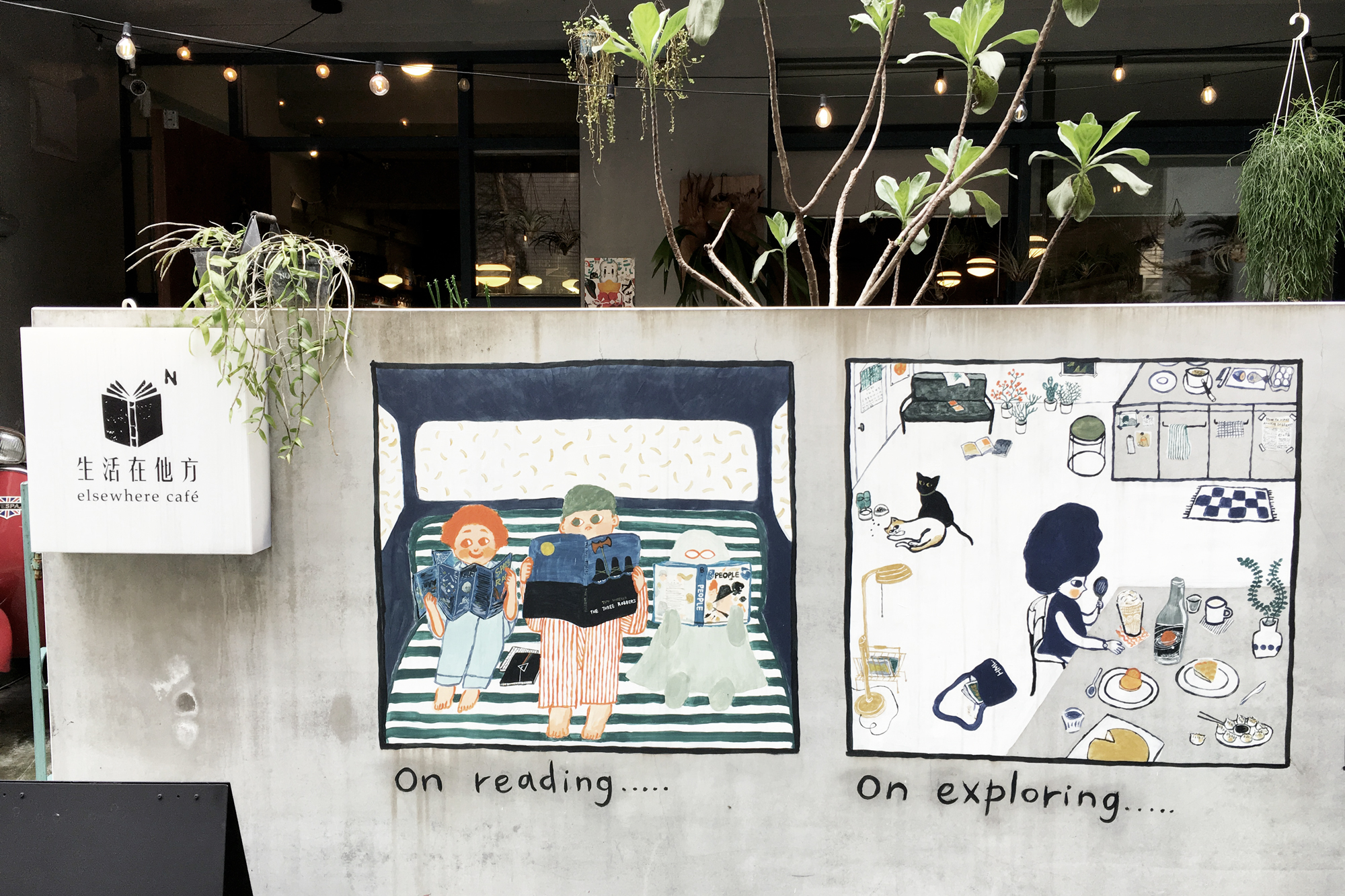