In my family, a trip to Taiwan doesn’t really end when we land back stateside. For as long as I can remember, the final days of any trip to Taiwan was basically an extended shopping spree, checking off all the standard boxes, making our rounds, taking an extra lap to see if there’s anything new worth trying. Taking stock of the room left in our extra large suitcases to fill with goodies. Making another round in the supermarket looking for flavors of the motherland packaged safely enough to survive the journey stateside.

The trip back wasn’t complete without hauling edible souvenirs across the Pacific. The first delusional night after getting back home, suitcases open on the living room floor, the goods slowly making their way to the kitchen counter, a little bite here and there, maybe, if we’re lucky, some ramen boiling away for a low effort dinner before giving in to the jet lag. Mornings in the weeks following a trip to Taiwan taste like pineapple and maltose and the fragrant aftertaste of good tea. The first to go is always the pastries. Though there is a solid effort in prolonging the supply by freezing them and then toasting each morning. And then the snacks disappear in the form of afternoon pick me ups or after dinner TV munchies. Until finally all thats left is, well, the lingering taste of tea. And of course other condiments and staples that have longer shelf life and become mainstays in the pantry, but we’ll save that for another time.

Snack souvenirs (yes, we’re gonna coin that term because there isn’t really an elegant translation for 伴手禮) are a thing in Taiwan (and in Asia in general), making up a thriving industry with products and trends that are rooted in tradition but evolve with the trends. Taiwan makes it hard to avoid: every tourist attraction, every transportation hub is filled with the greatest hits. So even when visiting somewhere as familiar as a motherland it is culturally intuitive to stock up and share with friends back home, and to get some extra inventory for yourself. And year after year they become a part of a ritual, a way of savoring each trip for as long as possible. After all, did you even go to Taiwan if you don’t come home with food?

Every trip’s haul varies, but here are some consistent players in my suitcases that help bridge home and traveled home. 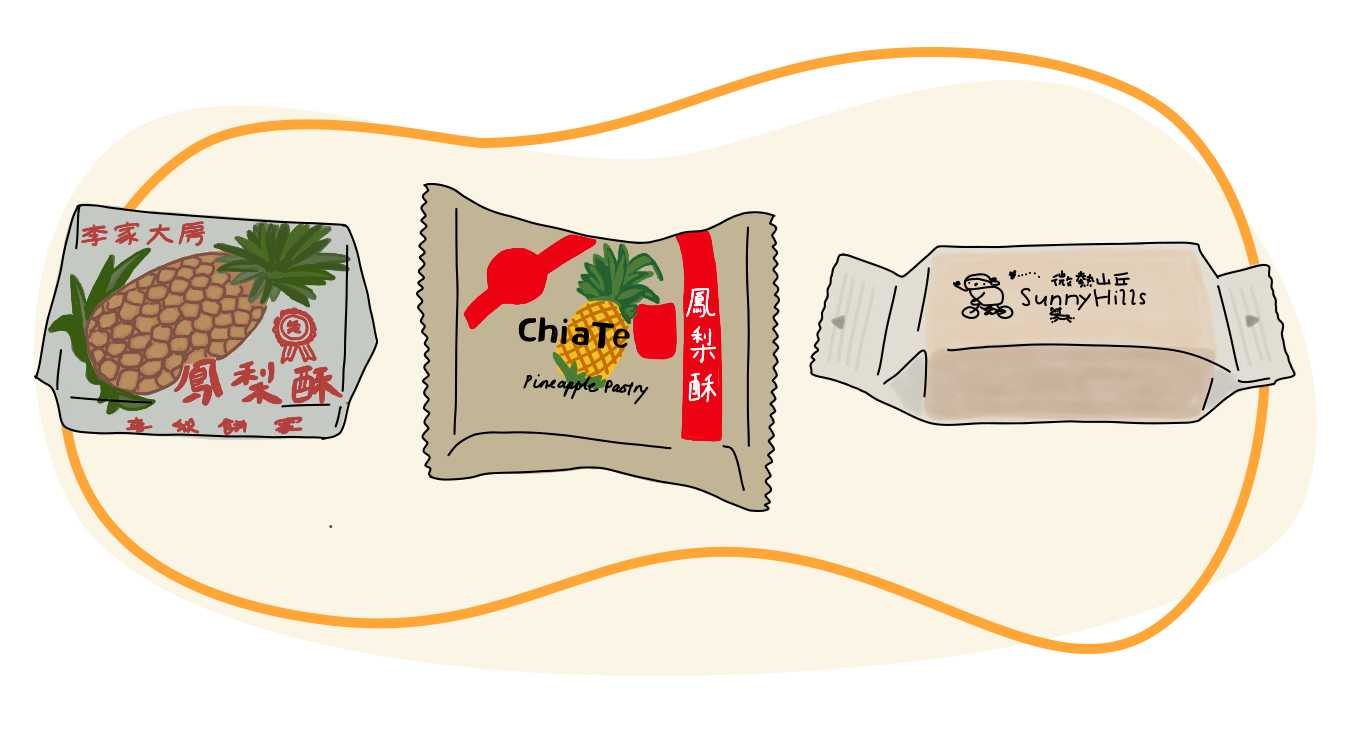 The classic take home, giftable, shareable souvenir snack that comes in so many different forms these days from old school no frills rubber band over a flimsy plastic container to intricately illustrated and elaborate packaging. Everyone has their favorites, from nostalgic to new, pure to experimental. Regardless, they all fit the bill when looking for a simple pleasure of a fruity sweet pastry paired with oolong tea. Here are three that tend to make it into my suitcase:

Beyond pineapple cakes, if anyone in the family goes to Taichung that last week we like to place an “order” for sun cakes from Tai Yang Tang (太陽堂), a longtime pastry establishment that specializes in sun cakes which truly aren’t cakes at all (not that moon cakes are cakes either) but a sweet maltose filling in soft layered thin pastry wrapper. A lot of other bakeries sell versions of this and there are a few “fake” (aka not associated with the original shop but took their name) bakeries in Taichung, but nothing quite hits like the original one. These freeze well and warm up nicely so it’s ever so slightly gooey in the middle. But my guilty pleasure is eating it straight from the refrigerator so that the sugar is still slightly crunchy. 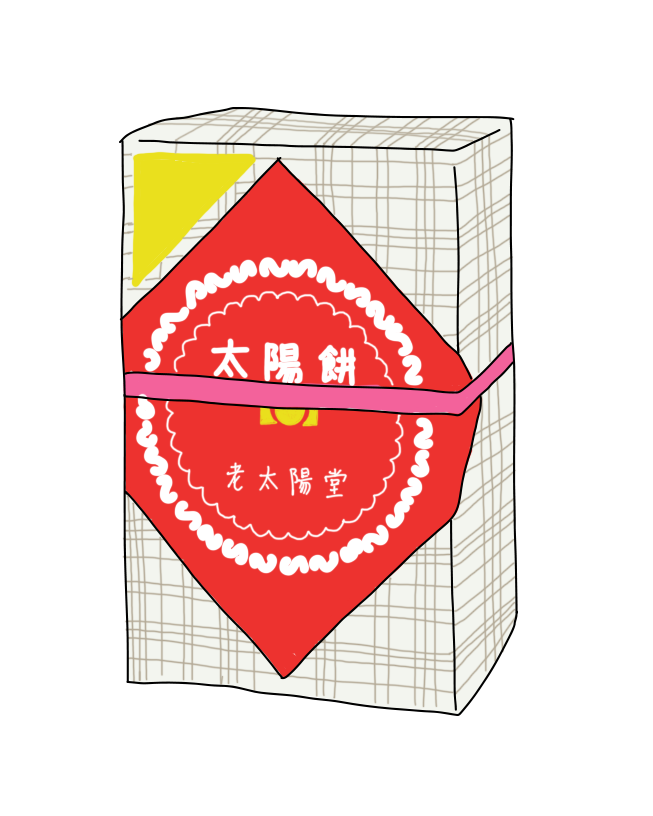 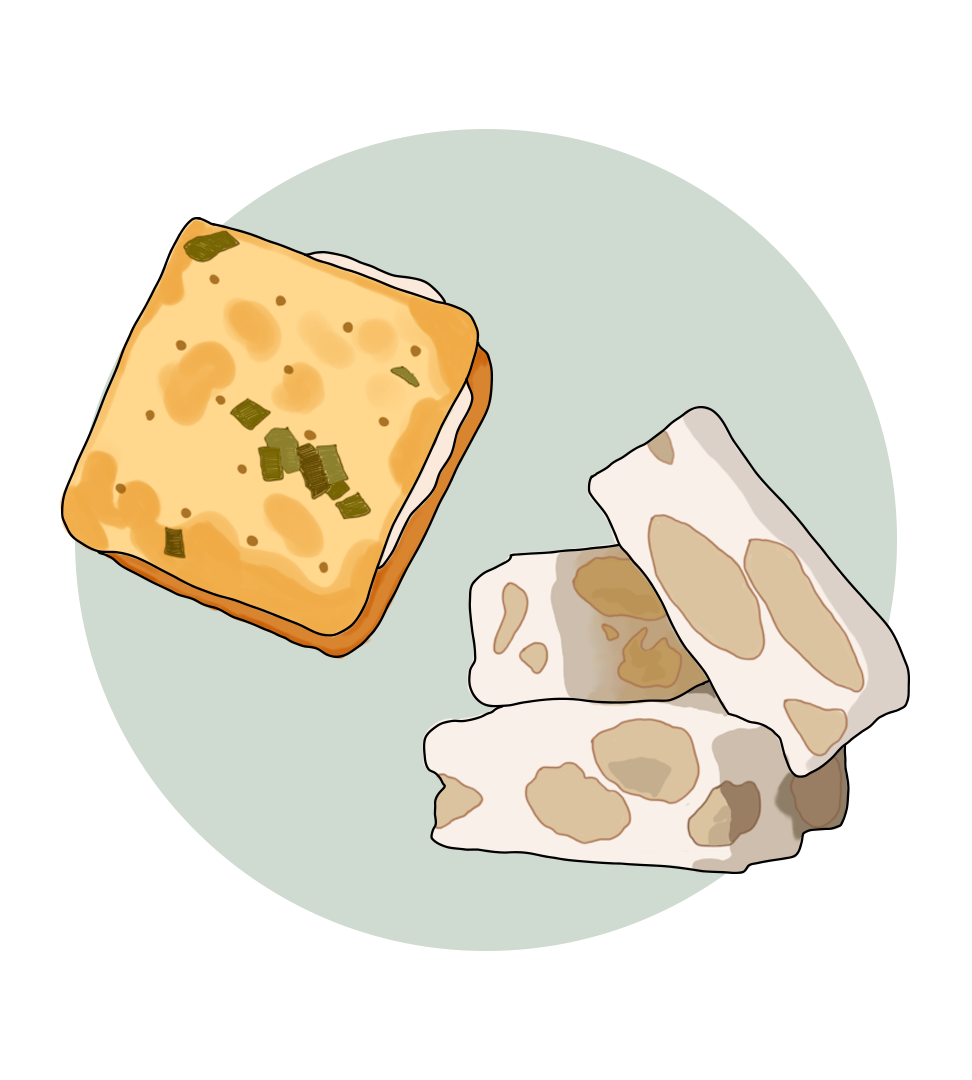 To be honest, I don’t really know how or why nougat became a popular snack souvenir. But in terms of pure practicality, they make a good choice with the lengthy shelf life. Nougats in Taiwan are different from their cousins in Europe. Taiwanese nougats are chewier, creamier, with a texture more similar to chewy candy. They come in a variety of flavors (namely the classic local dessert flavors and popular fruits like black sesame and matcha and mango and cranberry) and generally have almonds to add a little crunch. These can be found in souvenir shops, bakeries and grocery stores alike and generally are pretty good across the board though many people have their go-to brands based on sweetness, the milky flavor and texture.

At some point in the 00s someone had the crazy idea of marrying the popular scallion soda crackers with nougat fillings to make salty sweet nougat cracker sandwiches. It sounds weird, I know. And to be honest, as someone who likes to keep salty and sweet snacks separate, it isn’t my favorite combo, but it has become a staple in the world of snack souvenirs so clearly there is a market for it. Since then, as trends evolve, more nougat variations have emerged, including some biscuit “snow” nougats that incorporate crumbly cookie pieces into the nougat itself making for more of a light textured candy.

All in all nougat things make great “coffee table snacks” in Taiwan, where at home tea culture means you always want a little snack within reach of the tea set.

Speaking of tea, this really shouldn’t even be in this list because tea is a category in itself, but at a personal level I never leave Taiwan without an exorbitant amount of tea. Mostly oolong varieties but also some black tea and green teas. Taiwanese tea shops are really upping the game in packaging so they make great gifts, but also tea is the most pure flavor of Taiwan that can be enjoyed just as perfectly far away from its source. 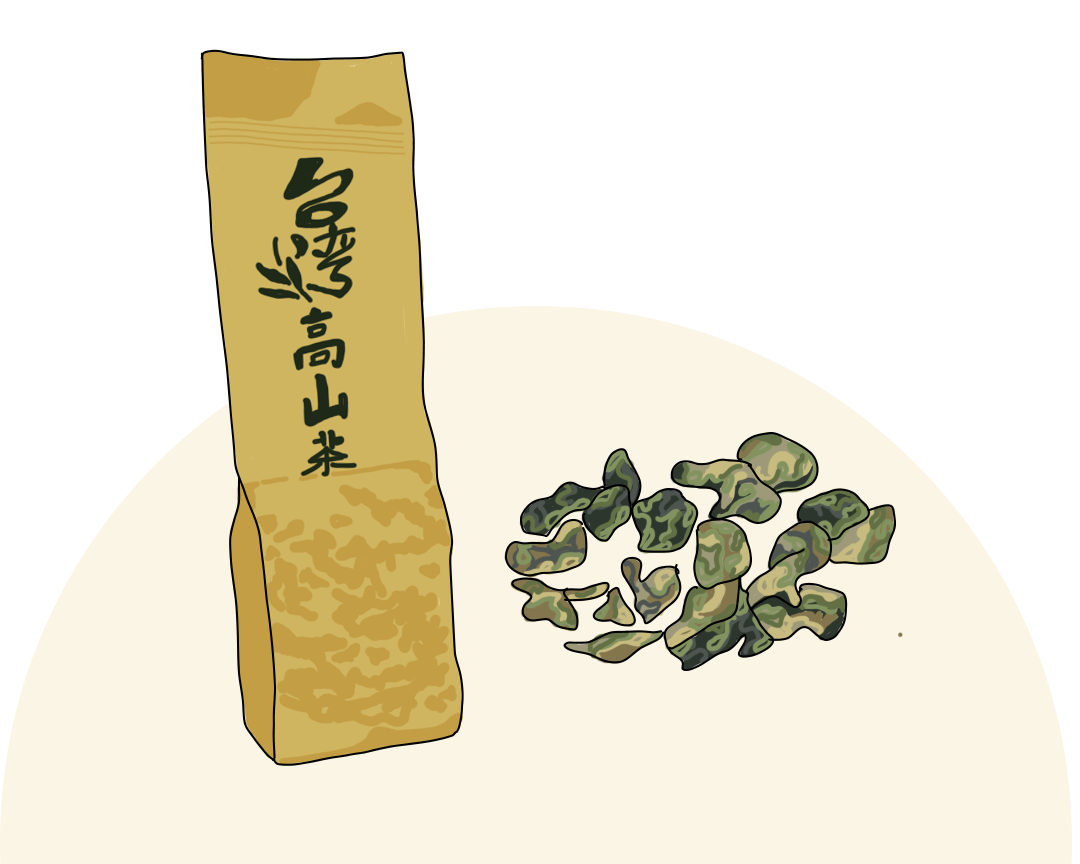 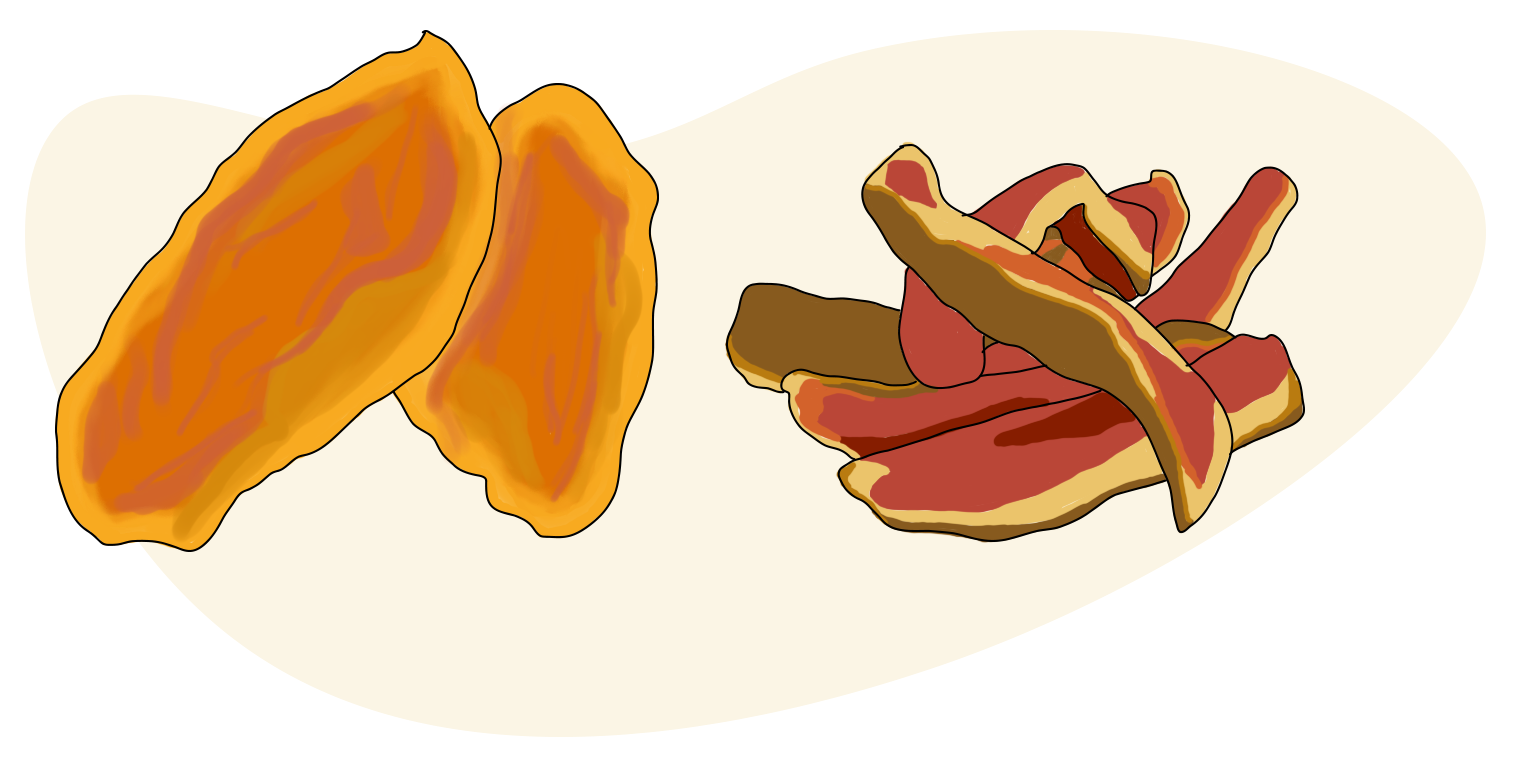 Fresh, seasonal fruit in Taiwan is unbeatable. From juicy irwin mangoes to genetically perfected milk pineapples to honey sweet longan to plump dragon fruit to crisp pearl guava to my personal favorite wendan pomelos, Taiwan’s bountiful produce is truly a national treasure. Of course, it is also something that is illegal to bring home (although I highly recommend packing some fruit for the plane ride – just don’t take it off the plane state side!). So the next best thing is dried fruit. This has become more and more popular over the years, with a healthy twist as many are marketed as no sugar added snacks. My personal favorites are mango and red guava and pineapple. The sweetness and fragrance of the fruit are concentrated to the point it almost tastes like candy.

So wherever you go, if you’re not buying local flavors of potato chips, you’re doing it wrong. But in Taiwan in addition to the fun flavors of Lays and Pringles, there are entire subgenres of bean-based, rice based crunchy crispy snacks. Ke le guo are pea based crackers shaped like twisty rotinis that come in a variety of salty and spicy flavors. Kali kali are an old school Japanese Taiwanese street snack turned CPG snack that comes in sweet and savory editions. Kuai kuai are puff corn snacks that are texturally similar to cheese puffs but come in every flavor but cheese. They kind of stick to your teeth but hold a childhood nostalgia appeal for many.

A quick pass through a convenience store or supermarket will be enough to overwhelm with options. 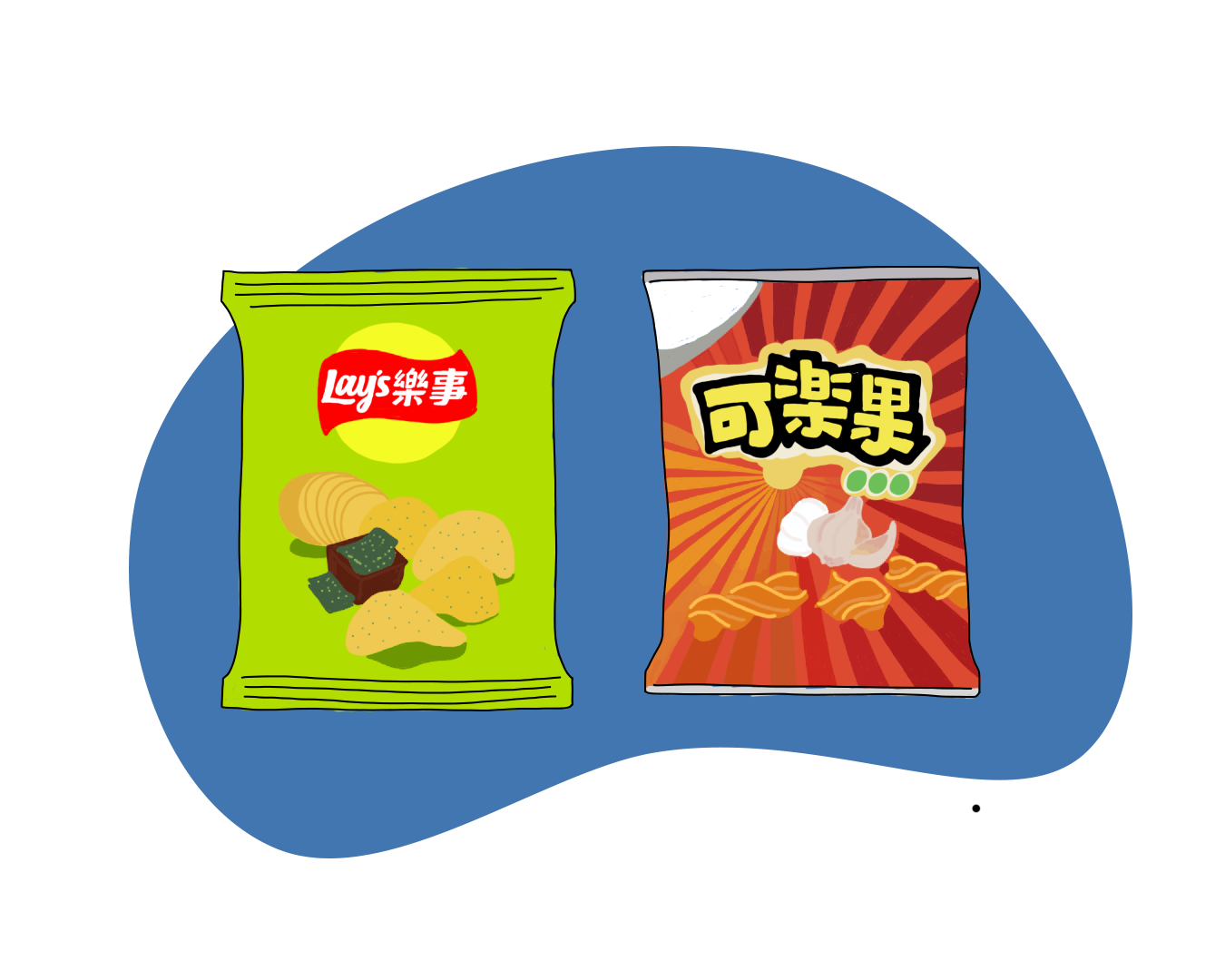 The noodle haul comes in two forms: instant and dry. There is always a stash of instant noodles (in my household this is more often than not the “One More Cup” brand) tucked into suitcases as a lightweight filler. It makes for a very special treat saved for a rainy day (read: college finals week all nighters).

And then treading the line between the realms of snack and staple is the pre-packaged dry noodle category. Single serving noodle packages with ready to mix seasoning and oil packets that come in flavors like shallot oil and mala. Add some veg and scallions, top with an egg and call it a meal. Or keep it simple and have yourself a filling between meal mini meal in minutes. The trending brands are constantly changing and increasingly celebrity endorsed, and many are being exported to Asian markets stateside (though at times double to triple the price with fewer flavors), so grab a few options in a few flavors and you won’t regret it.

Mochi 麻吉 — Mochi, the good kind, is really good. Good enough to be worth taking home. These days they come in a variety of flavors far beyond the traditional (chocolate cream and blueberry cream are my guilty pleasures). But even well-packaged mochi doesn’t have a long shelf life so best for a first few days back treat.

Dou Gan 豆乾 — Soy-based products come in dozens if not hundreds of forms in Taiwan and one kind that is snack-friendly is the dried marinated kind. Think of it as like a vegetarian answer to beef jerky, a little salty a little sweet a little sticky, and in various different forms – from tiny cubes to thin sheets. Generally vaguely five spice flavored, with spicy options too. 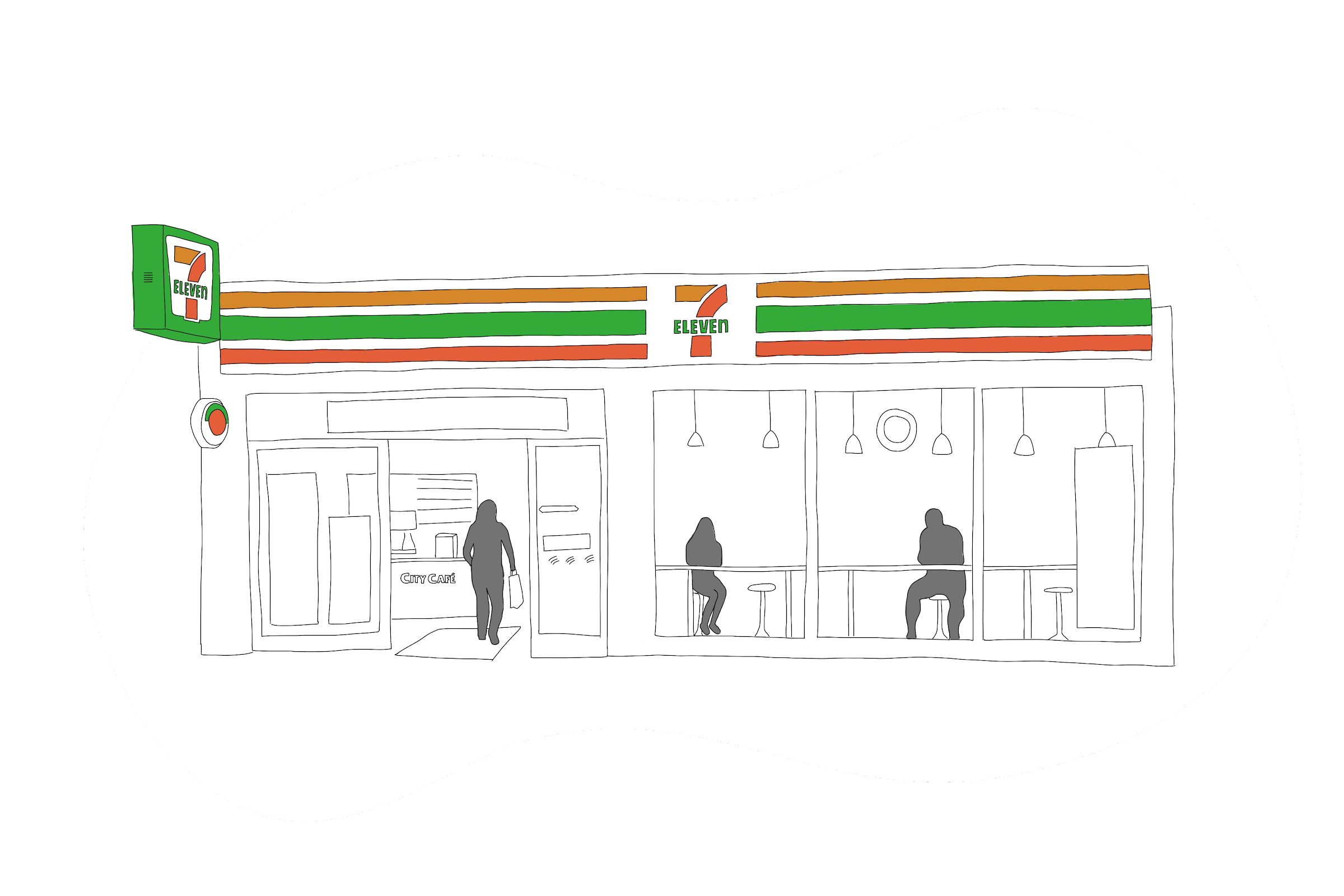 a guide to taiwanese convenience 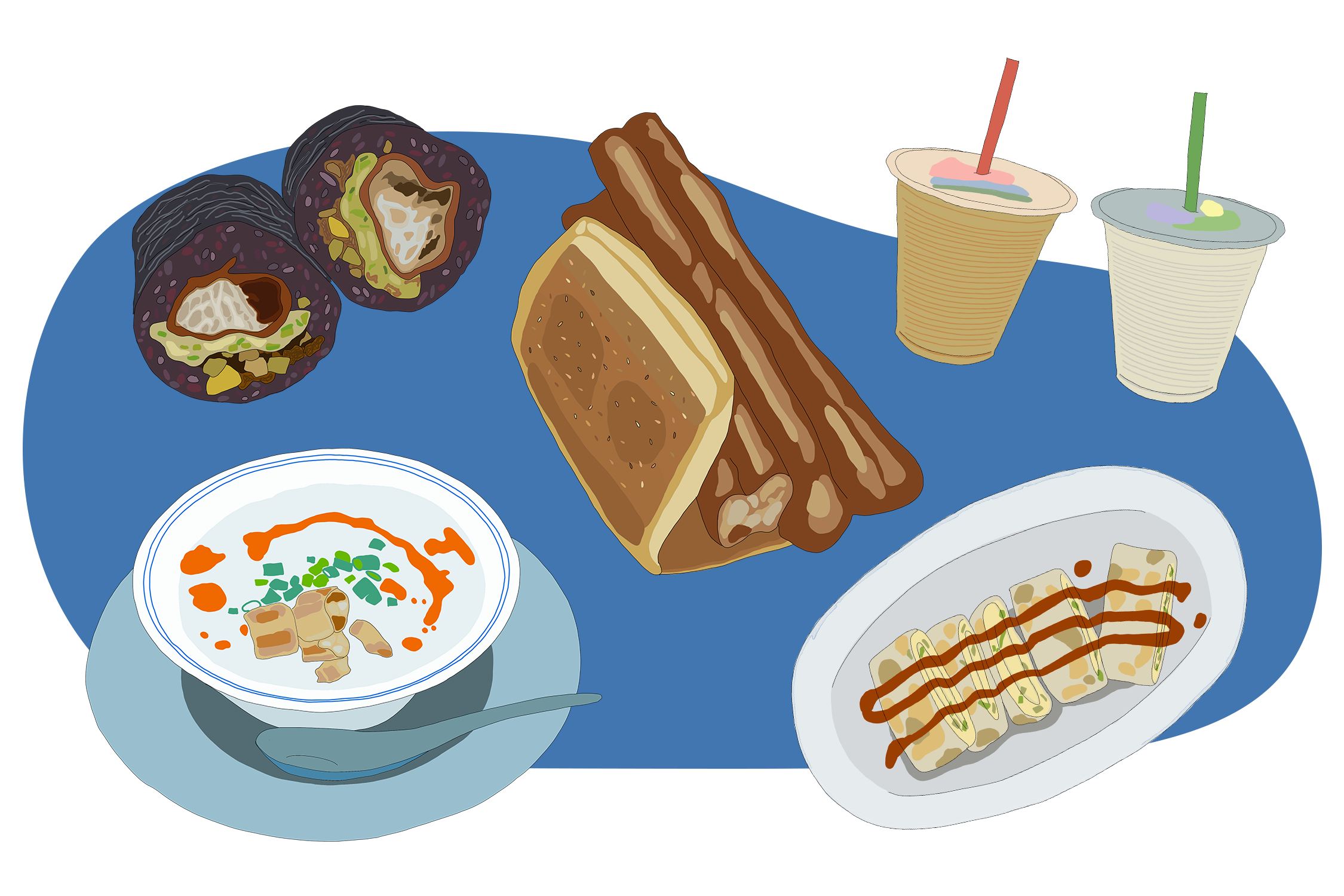 a guide to taiwanese breakfasts