a week in San Francisco

It’s actually remarkable how few times I have been to the Bay Area, considering I spent the better part of my life living in southern California, just a few hours drive or a 40 minute flight up. Considering some of my best friends, and my only sibling, lived in San Francisco for years. It seemed every time I would escape it would be across oceans, or at least to the other side of the Mississippi.

San Francisco, the cooler, alt sibling in the California family. Known for its unforgiving hills and dense fog, its vibrant inclusive culture, immigrant communities, storied architecture, grand bridges, and of course in recent years, for being the tech hub that has taken the world by storm.

San Francisco is tiny. Perched up on a little piece of land that juts into the water. The opposite of LA in so many ways. In the best ways. My random, spontaneous  stolen trip up to SF  was the first time I had been there for an extended amount of time. Enough time to get to know it a little bit. It was less of a trip, more of a brief relocation. Between grad school and work, taking a nomad life to a different base. Having a place to go home to (technically house sitting for friends), filling my days with plans with people from drastically different chapters of my life, wandering around until I hurt my hip (those hills are no joke).

What struck me most was that San Francisco felt foreign. It felt more foreign than Chicago did from LA. It felt more like Porto or Lisbon than any American city. But it also felt comfortable, like I knew how to exist here. I knew what to expect.

San Francisco was sunny for me. The early fall temperatures were brisk, but the skies were clear. As if trying to convince me I could stay. I couldn’t. I had always known, but this trip made me certain, that San Francisco was not a city I would want to call home, but a city I will continue to enjoy visiting regularly, getting to know it in snippets, collecting cherished memories. I should plan another trip over soon. I spent most of my days wandering. I’d coordinate my plans to be in a given geographical area and spend some time walking around beforehand. Acquainting myself with the streets. Realizing that some streets are steeper than others. Taking lengthy detours. Coming across unexpected views along the way. Stopping for drinks and snacks throughout the day.

The first couple days were spent mostly downtown. It was the easiest place to make plans, easy to get to and from, and an easy place to aimlessly wander. Pop in and out of shops. Acknowledge the existence of museums from afar without going inside. The days were too beautiful to be spent outside.

I was staying in Haight-Ashbury, just a short walk to Buena Vista Park. If it weren’t such a climb, I’d detour through more often. It probably contributed to my hip problems. But for those first couple days it was a nice hike up, admiring the city around me. A moment of feeling small, even in the small city, before heading into it. 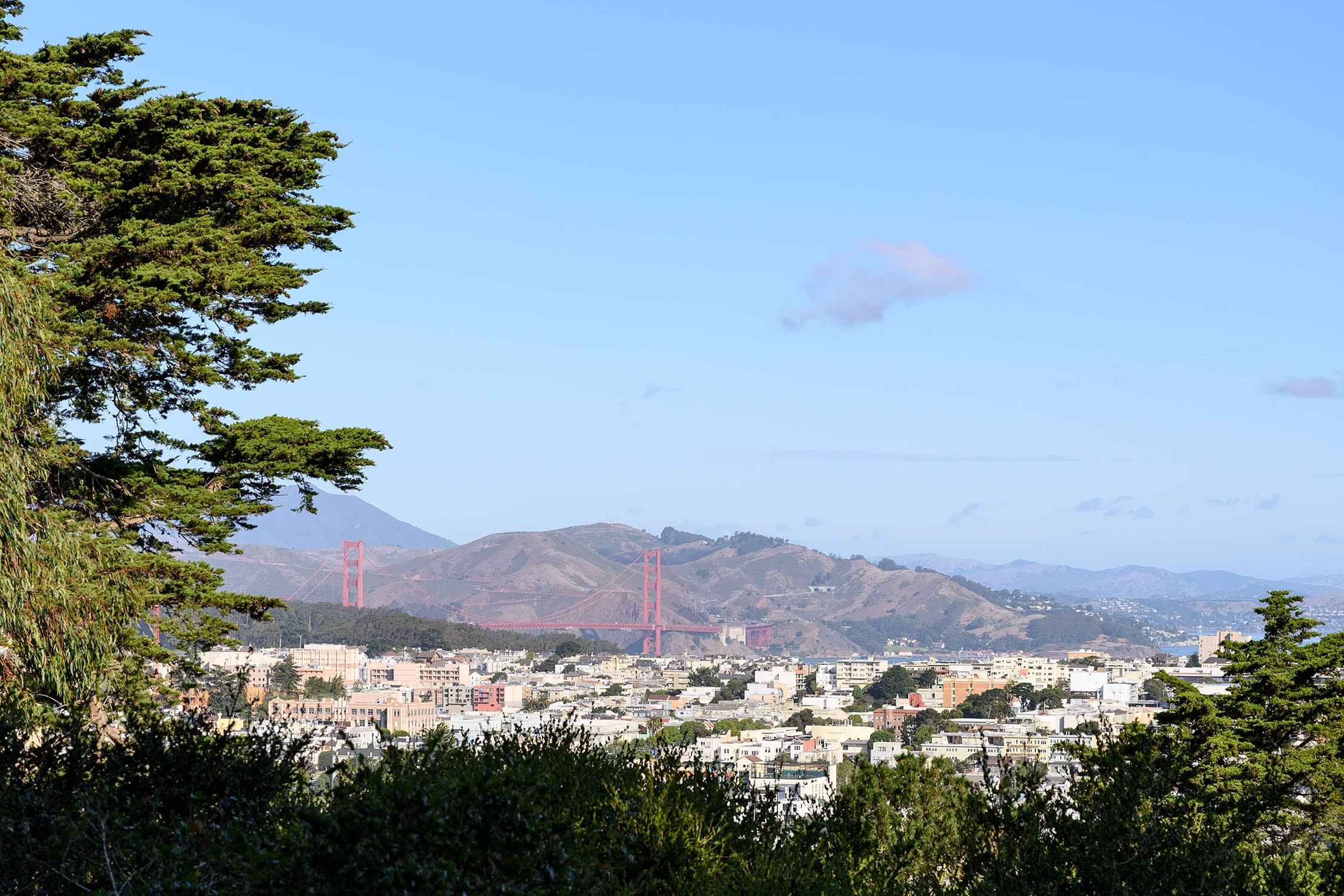 I can see why people are drawn to San Francisco. It has character, personality. It is naturally beautiful. Has interesting architecture. Every neighborhood feels compelling in a different way. Despite the increasingly Patagonia-clad population, the scruffy charm not quite yet compromised.

It’s nice to play tourist sometimes. Especially on a random weekday. Funemployment is especially exhilarating when there’s no where you need to be. Enough to make even Embarcadero feel like a treat. On a weekday afternoon, it was surprisingly quiet, making for a nice walk along the water. The rest of the days were spent… not in downtown, but more interesting neighborhoods. Mostly in Western Addition, wandering up to Pacific Heights. This part of the city is more fun to exist in. It feels quotidian in the best way. Lively streets filled with shops, restaurants, cafés, cutting through quiet residential streets. Nothing particularly remarkable (though some of those grand Pac Heights houses are worth ogling at). Which is what makes it appealing to me. And of course time was spent in the Mission District. I mean, Stonemill Matcha? Say no more. Went twice in one week. Up and down Valencia Street and around the blocks to admire the street art and loop around the park. I will say, SF does parks way better than LA. No wonder people crowd the lawns on sunny days. 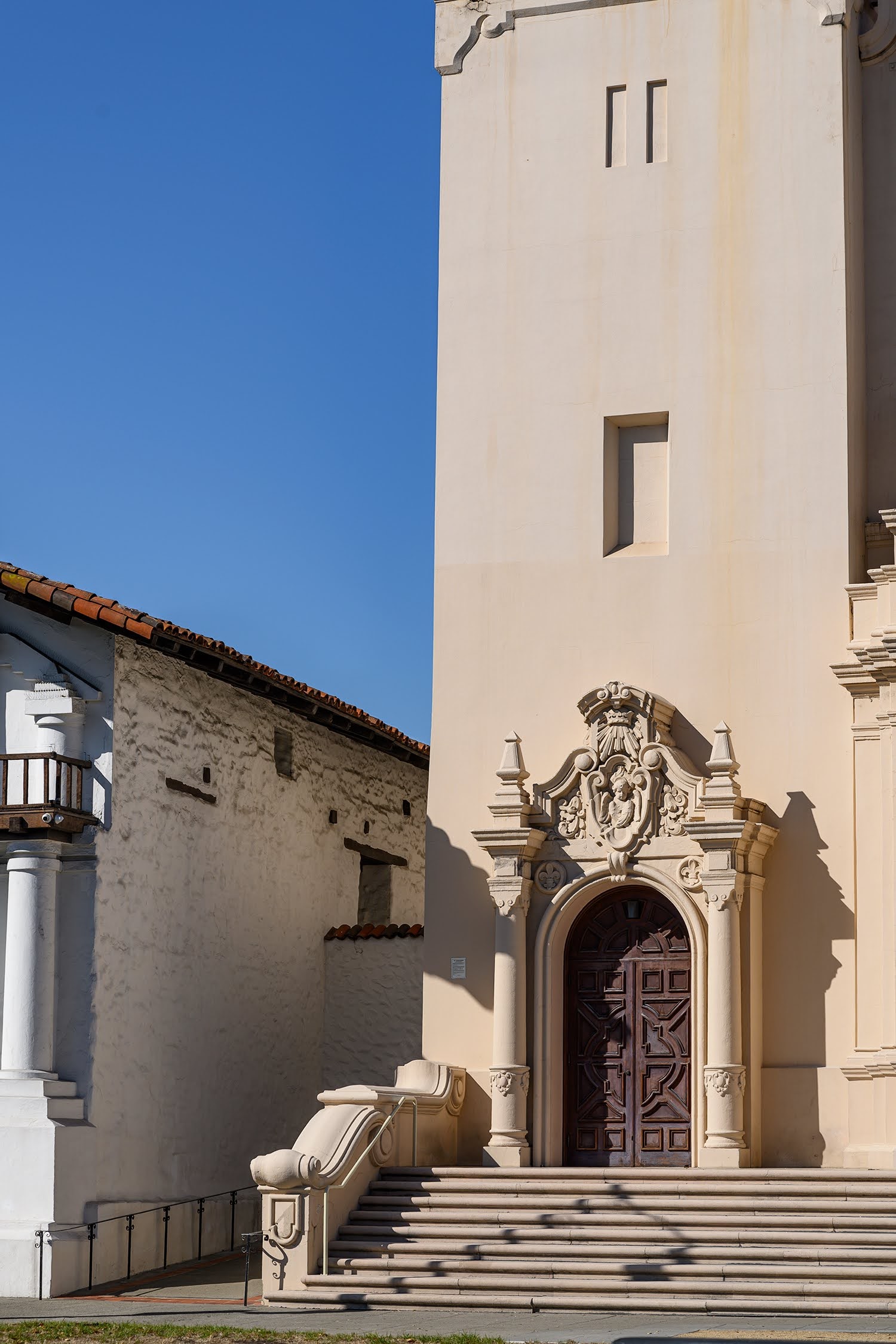 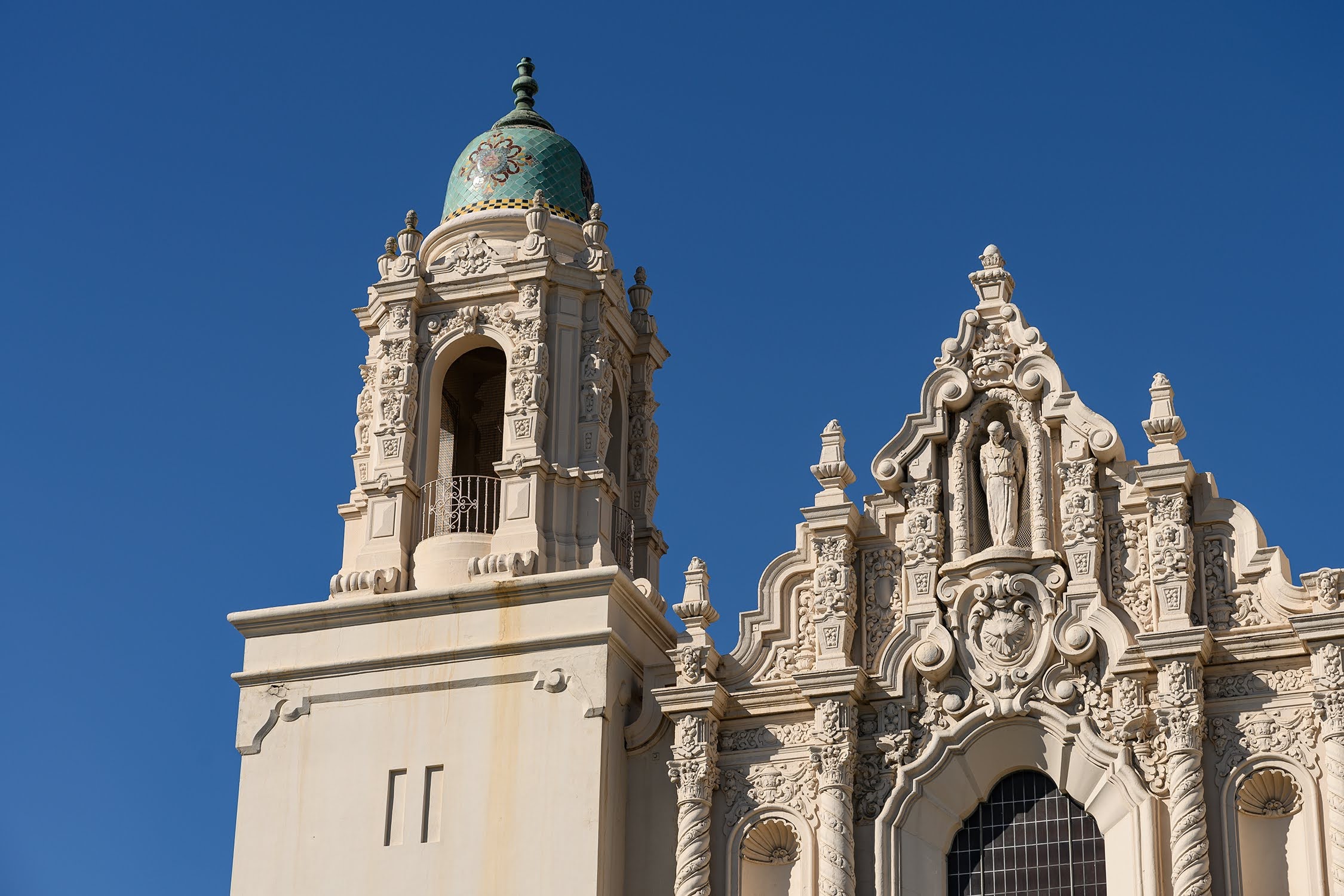 A lot of  time was also spent appreciating the architecture in all its varied forms from classical to contemporary. Grand in a way that feels notable for this coast. Embedded into the everyday rhythm of the city that feels so much more cosmopolitan than LA. 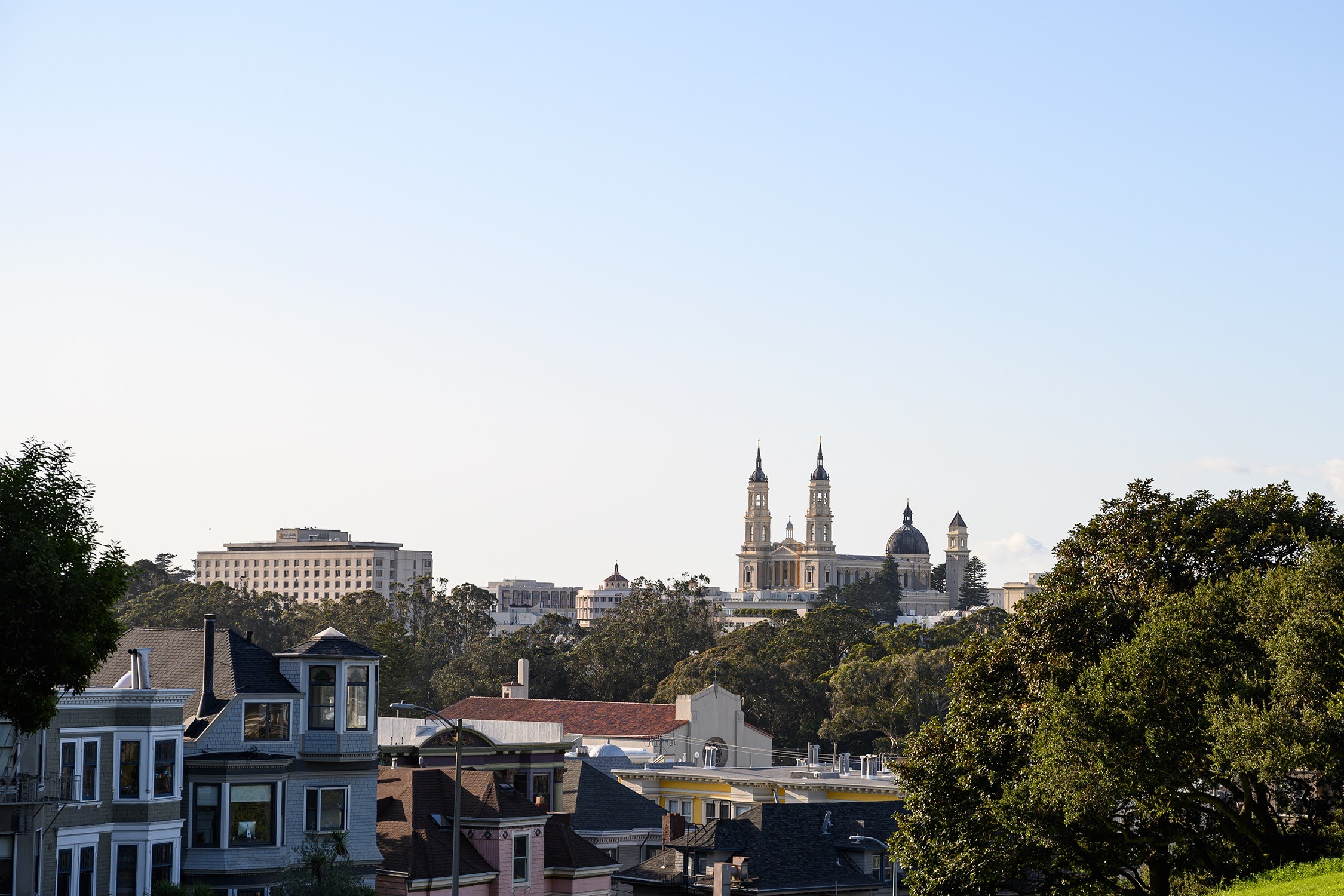 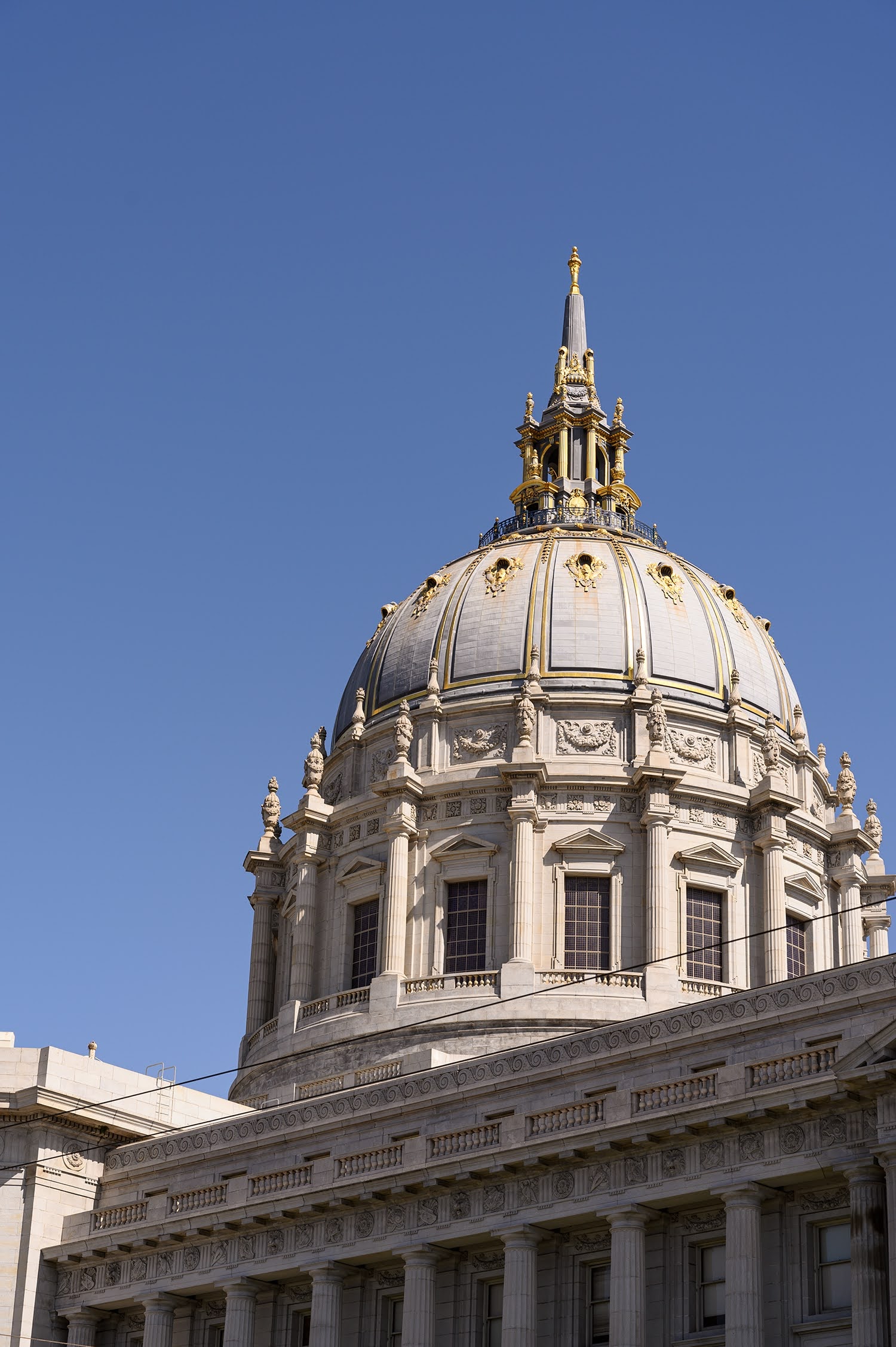 And of course I went out of my way to catch views. The lush luxury of Presidio. The panoramic views of Telegraph Hill. The waterfront expanse of blues looking out from the Marina. The rest of the time was spent eating and drinking all around town. From casual solo meals to feasts with friends, we ate well that weekend. Some favorites: And a special moment of appreciation for the prettycarbs of San Francisco. Because truly bakery hopping was the main itinerary of this trip. All in all, it was an unexpectedly vitalizing trip. Beautifully sunny every single day I was there. Like the city was showing me her best self. I went in with no expectations but came out with better perspective. A better sense of place. And after reconnecting with people from every chapter of my life from childhood to high school to college to job number 3 to grad school  to new friends, a better sense of self. It was the perfect escape from an escape. Running away from one thing by running to it but doing it my way. And then when the time came, leaving for another comfort far away. Buying a little more time before having to figure out what’s next. And though I didn’t know it then, a final hurrah of carefree travel before everything changed and we no longer take travel for granted. 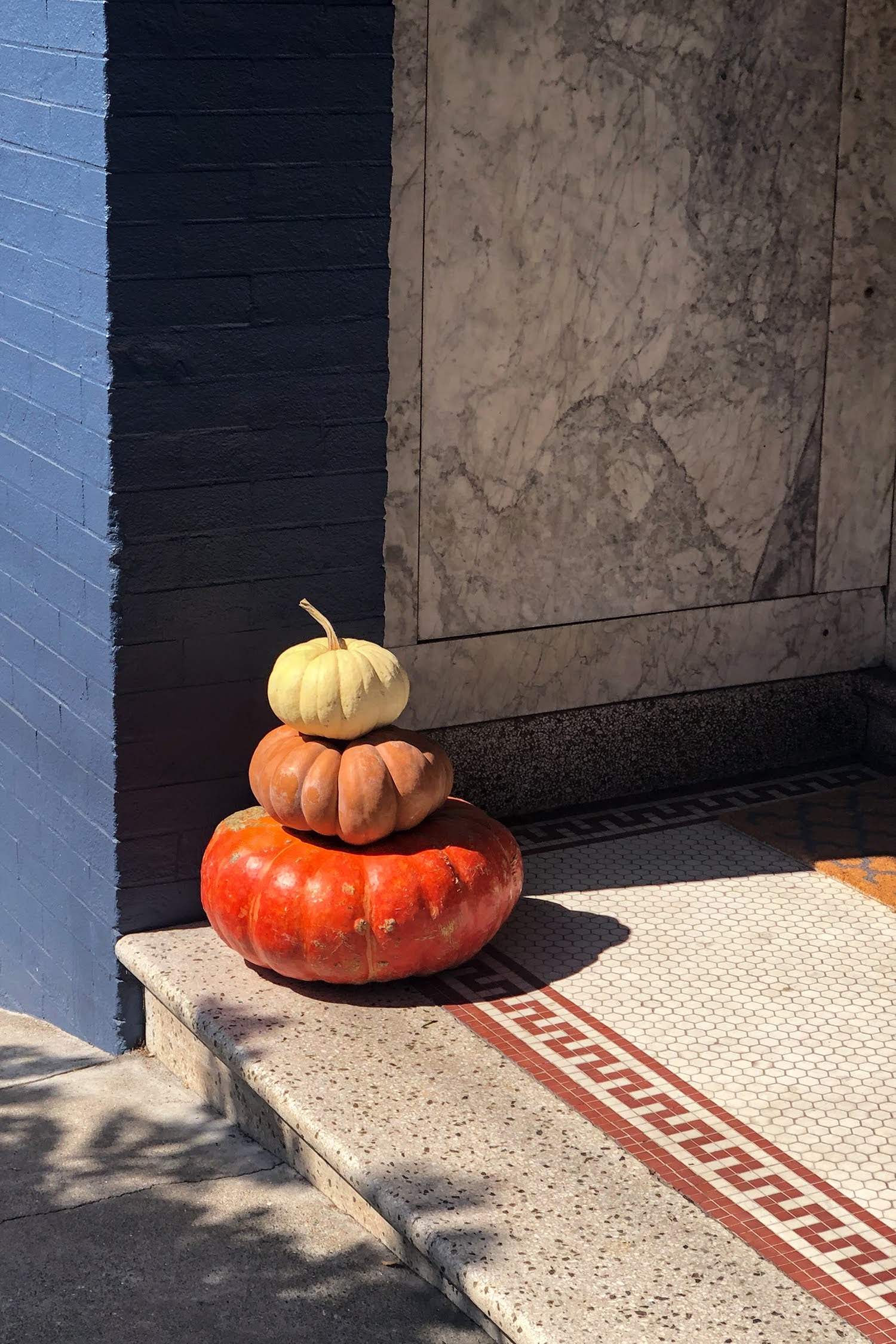 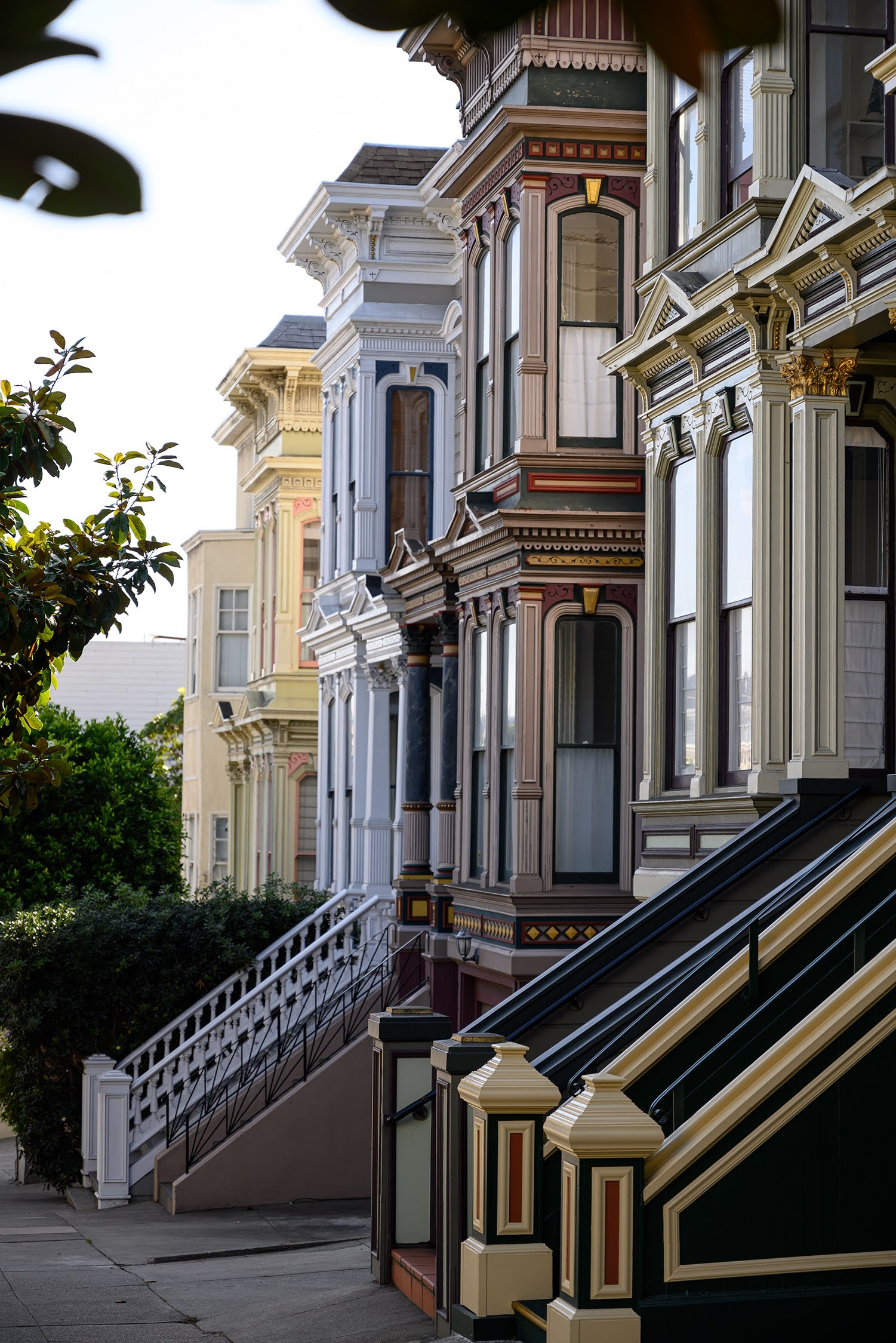 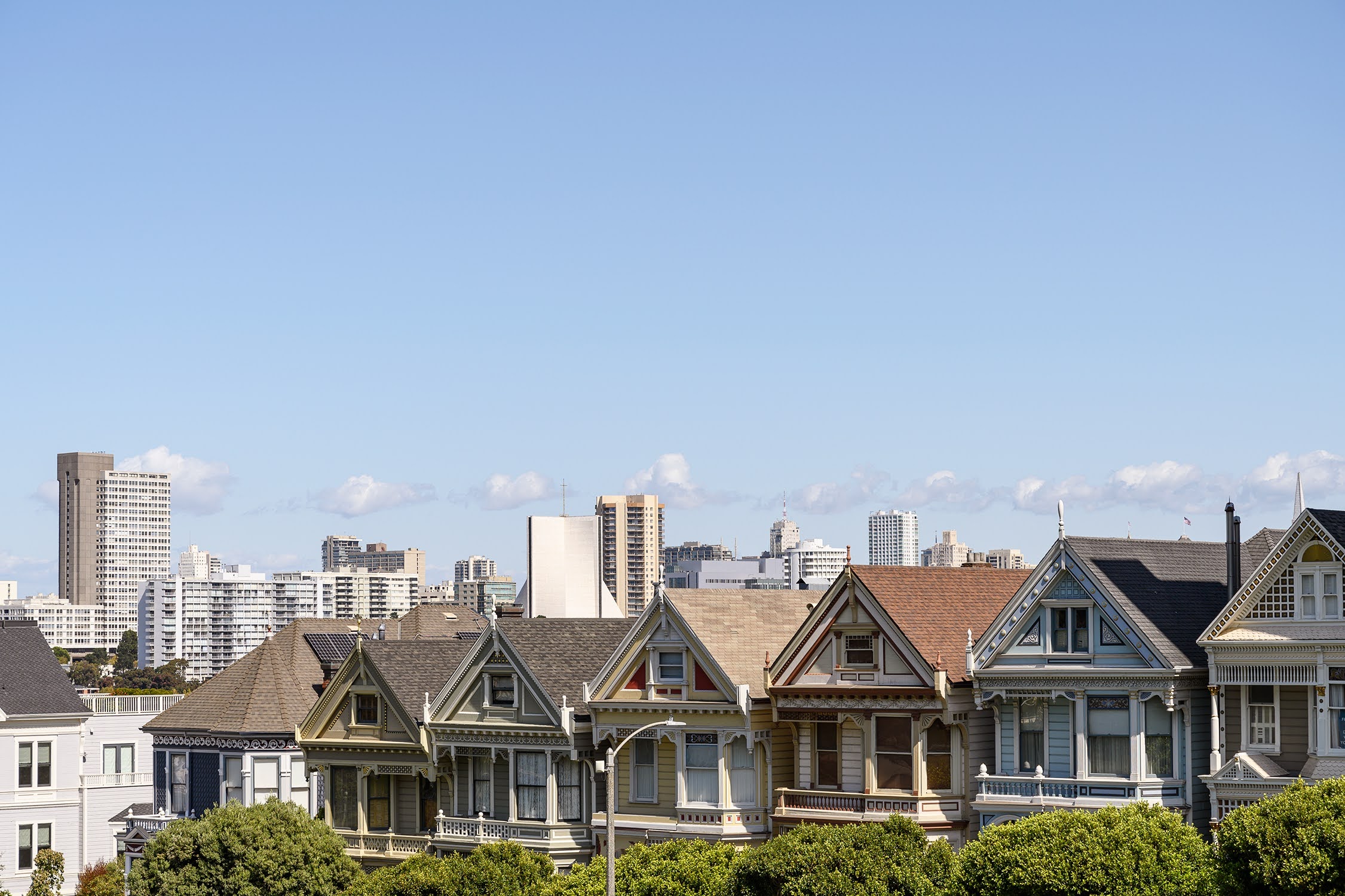 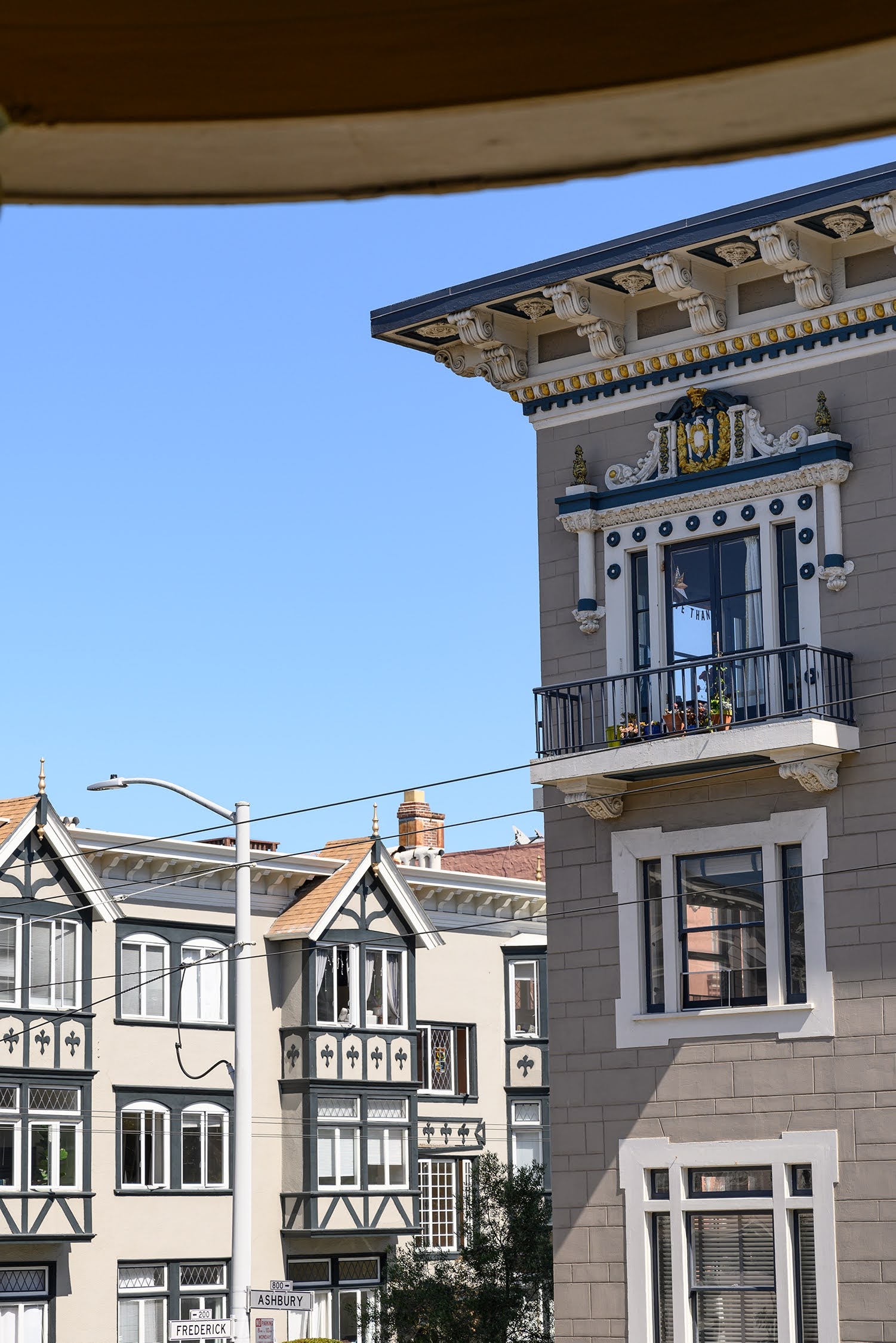 Thank you, SF. I can’t wait for my next visit. 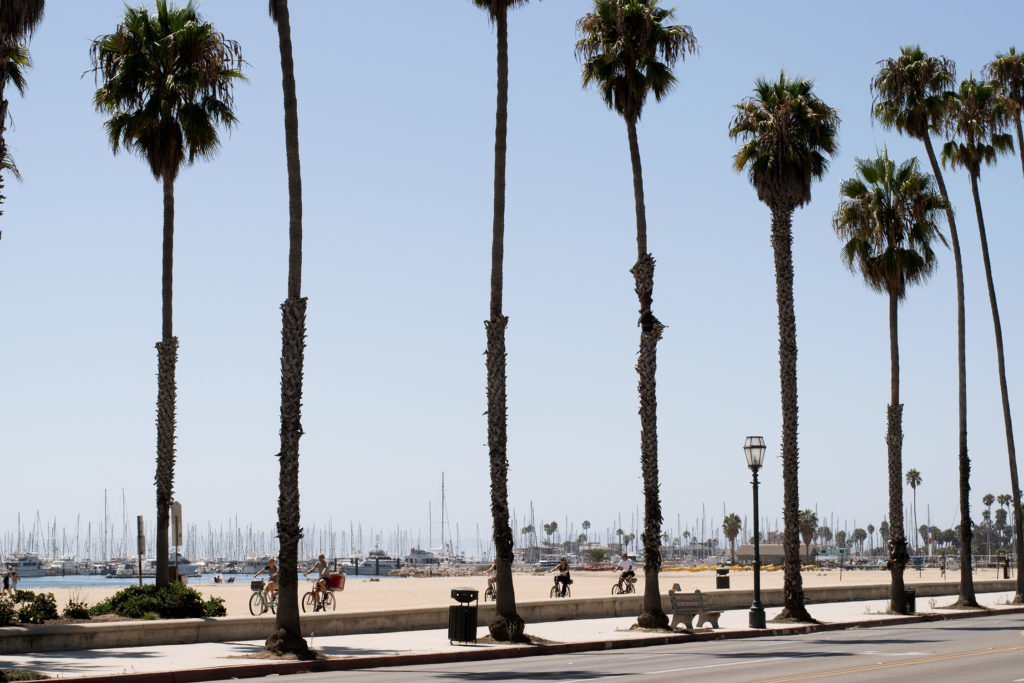