Taipei is the cultural, political and economic center of Taiwan. It is located in a basin in northern Taiwan, hence it’s name, 台北 (tai bei): tai of Taiwan, and bei meaning north. The capital city is what most people think of when they think of Taiwan (if they think of Taiwan). Even the most iconic monument in Taiwan (practically a mascot for Taiwan) shares the name of the city, Taipei 101. Taipei is an amalgam of a nuanced history and political landscape. It feels a little Japanese, a little Chinese. Traditional buildings are juxtaposed with modern architecture. A lively chatter of languages can be heard throughout the city.

Over 2.6 million people call Taipei home, most of them in the densely packed urban area (the population density is nearly 10,000 people per square km). Compared to the average European city, Taipei is large at ~270 sq km, spanning 12 different districts. When you combine it with the surrounding New Taipei City (aka the also very urban suburbs) and Keelung (a smaller city just north of Taipei), you account for 30% of the population of Taiwan.

Demographics and geography aside, Taipei is like the global ambassador for Taiwan, the gateway to the rest of the country, carrying the burden of proving Taiwan’s value and charming visitors to want to discover more beyond the city limits. All things considered, Taipei does a pretty damn good job of it.

While it is the most cosmopolitan and modern part of Taiwan, it simultaneously celebrates the cultural heritage and pushes forward to the future of Taiwanese culture. It teases the natural beauty of Taiwan while exuding Taiwanese warmth toward foreigners and lifestyle of convenience. From the bustling city life, one can easily escape into nature: up in the mountains, into the hot springs. From street foods to avant-garde culinary experiences, from historic monuments to department store complexes, Taipei has it all.

Taipei is well-connected in a network of Asian metropolises, in constant dialogue with Tokyo and Seoul and Hong Kong and Shanghai. Beyond the Asia tourism, there’s the exchange of fashion and trends, you can expect pretty much any trending chain store to open up an outpost in Taipei. (It’ll likely be cheaper too).

Taipei is the perfect place to start your Taiwanese journey. You could just as easily spend a weekend here or several months and not get bored. From here, you can go anywhere with the tap of a card. But don’t hurry along too quickly – there’s plenty to explore here in the city.

Taipei is served by two airports, Taoyuan International Airport (TPE) and Taipei Songshan Airport (TSA). The former is (as one may assume from the name) not actually in Taipei city limits, but there is an Airport MRT that takes you straight to Taipei Main Station within an hour, as well as several bus options and the high speed rail that will also bring you into the city in no time. Songshan Airport is located in the Song Shan district, and has a station on the brown Wenhu MRT line. This airport is mostly used for domestic and regional flights.

If you are coming from any other part of Taiwan, you’ll likely be coming into Taipei Main Station, which is a transportation hub that encompasses all of the trains, HSR, MRT (red and blue lines), long distance buses, and many local bus lines. It can be a bit of a labyrinth to navigate its many subterranean levels but has decent bilingual signage and many visitor and info centers to guide.

Taipei has a well-established network of public transportation between the MRT system and bus system. Get an EasyCard (either load up with cash or get day passes) and you can get anywhere in the city and into the outskirts for day trips fairly easily. Even taxis take EasyCard (and are much more reliable and fast than Uber). The MRT operates from 6am to midnight every day, while the buses tend to start off a little earlier around 5am and vary in terms of operating hours.

The MRT is by far the most accessible and reliable form of public transit, with announcements in Mandarin, English, Hokkien, Hakka and Japanese. Buses can be a hit or miss depending on the route. Taiwanese taxi drivers can get you where you need to go faster than an ambulance, but most drivers don’t speak English, so it may be easier to use Uber instead (taxis are significantly cheaper in Taipei).

There is also a popular bike-share program (YouBike) throughout the city starting at 10NT (~30¢) every 30 min for the first 4 hours.

If it’s your first time in the city, it’s best to stay central so it’s easy to get around. There are many hotels and hostels near Taipei Main Station that would provide easy access not only around the city but also to pretty much everywhere else in Taiwan.

For those looking for more of an upscale, grown up but trendy place to stay, close to shopping and nightlife, stay at one of the many hotels in Xin Yi district, near Taipei 101. From Hyatt to the W to Humble House, there are many international and local options available.

If you’re on a student budget or backpacking, your best bet would be Ximending, which has a lot of affordable options, though you won’t be getting any peace and quiet here.

And if you’ve done all the touristy things and are looking for luxury or an escape from the bustle, there are many nice hotels that are in less convenient locations, like the Mandarin Oriental or Sherwood hotel in Song Shan district, or boutique design hotels in Da An district like Eslite or Home Hotel. Zhong Shan district is less popular for tourists, but also has some hotels like Regent Taipei and Okura. Her majesty Taipei 101 regally overlooks the city with the poise and grace of royalty. The former tallest building in the world defines Taipei’s skyline. Until recent years, she stood high above the rest of the city, but slowly there are more buildings being constructed around her. The architecture is full of symbolism, from the eight segments that evoke the layers of a pagoda or segments of bamboo to the four coins that adorn each side and the ruyi that graces each layer. Taipei 101 is inspired by traditional design while also embracing contemporary engineering to create a beautifully unique building that represents Taiwan’s heritage and future all at once. It’s a must-stop for visitors. Observation deck aside, the mall attached (ahem + food court) is worth walking through, and you can easily continue on to the many interlinked department stores in the Xin Yi shopping district. Of course the best view is of the building itself. Elephant Mountain a short distance away has a trail leading up to picture-perfect panoramas of the city.
CKS Memorial Hall 中正紀念堂 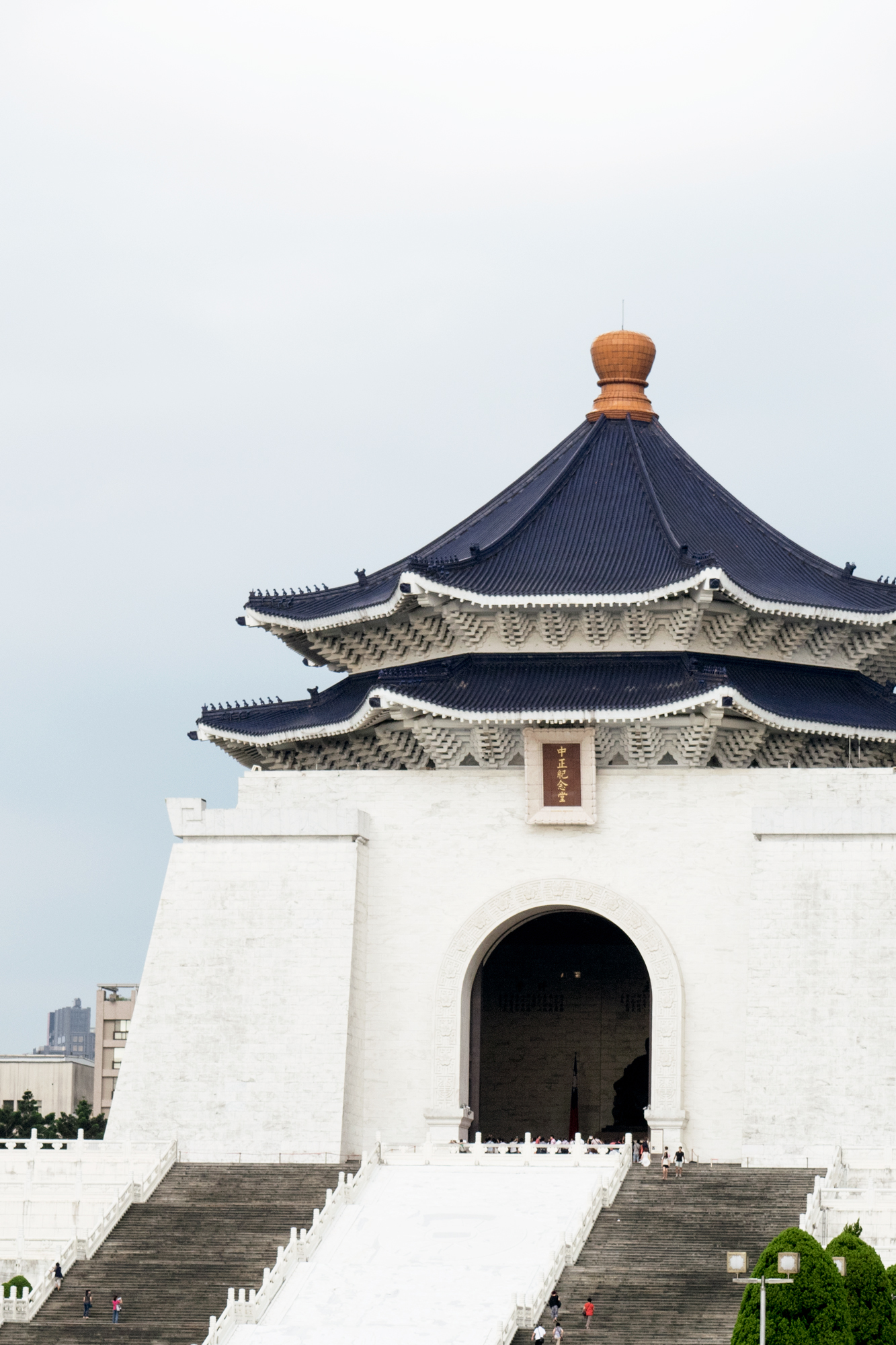 Located in the heart of the city in Zhong Zheng district, CKS Memorial Hall is a lot more than a monument housing a statue of former president Chiang Kai Shek. While the blue-roofed building is iconic in its own right, the memorial functions as an urban park and gathering place for locals, and is often host to various cultural events and exhibitions. The gated park occupies 25 hectares in the central neighborhood and is surrounded by a roofed corridor offering a shaded pathway along the perimeter. Within the walls are exquisitely maintained Chinese gardens, the expansive Liberty Square and on either side, the vibrant red National Theatre and National Concert Hall that beautifully complement the white and blue of the main hall. Tourists flock here for the obligatory photo, but even for the locals it carries more than its weight as a public green space.
Longshan Temple 龍山寺 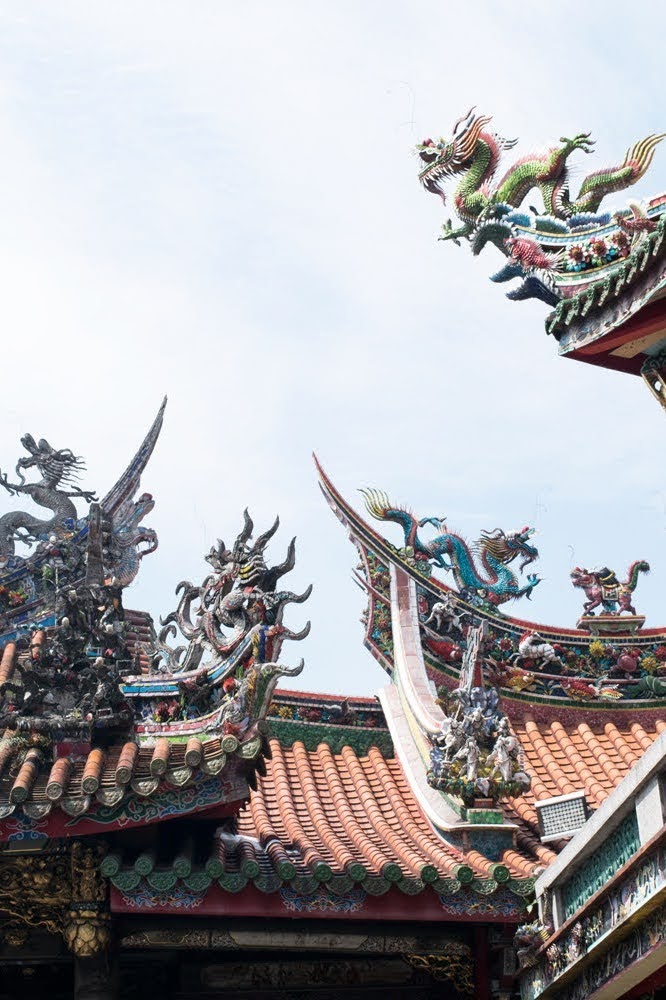 Taipei is hardly lacking when it comes to historic temples, but the 18th century Longshan Temple in Wan Hua district is a popular choice for visitors to experience and learn about the religious practices in Taiwan. The temple has been an institution for local worshippers for generations and continues to be an active and bustling place of worship in addition to being a landmark. The temple encompasses various religions practiced in Taiwan, including Buddhism, Taoism, Mazuism and local folk religions. Like many other religious buildings around the world, many come to admire the architecture, the intricate embellishments and detailed stone carvings that have been rebuilt and maintained through history make it a living piece of art.
Shilin Night Market 士林夜市 Taiwan is known for its night markets and Shilin Night Market might be the most famous of them all. The international tourist destination has all the street food you could ever want in one place. The market has had a consistent presence every evening in Shi Lin district for over a hundred years, and has grown and evolved to host over 500 stalls. While Taipei residents often opt for smaller local night markets, Shilin Night Market continues to be an ideal one-stop shop for tourists to live out their night market dreams into the wee hours of the night. So grab a snack or four and go with the flow of the crowds as you embrace the sensory experience of a bustling night market.
National Palace Museum 故宮博物院 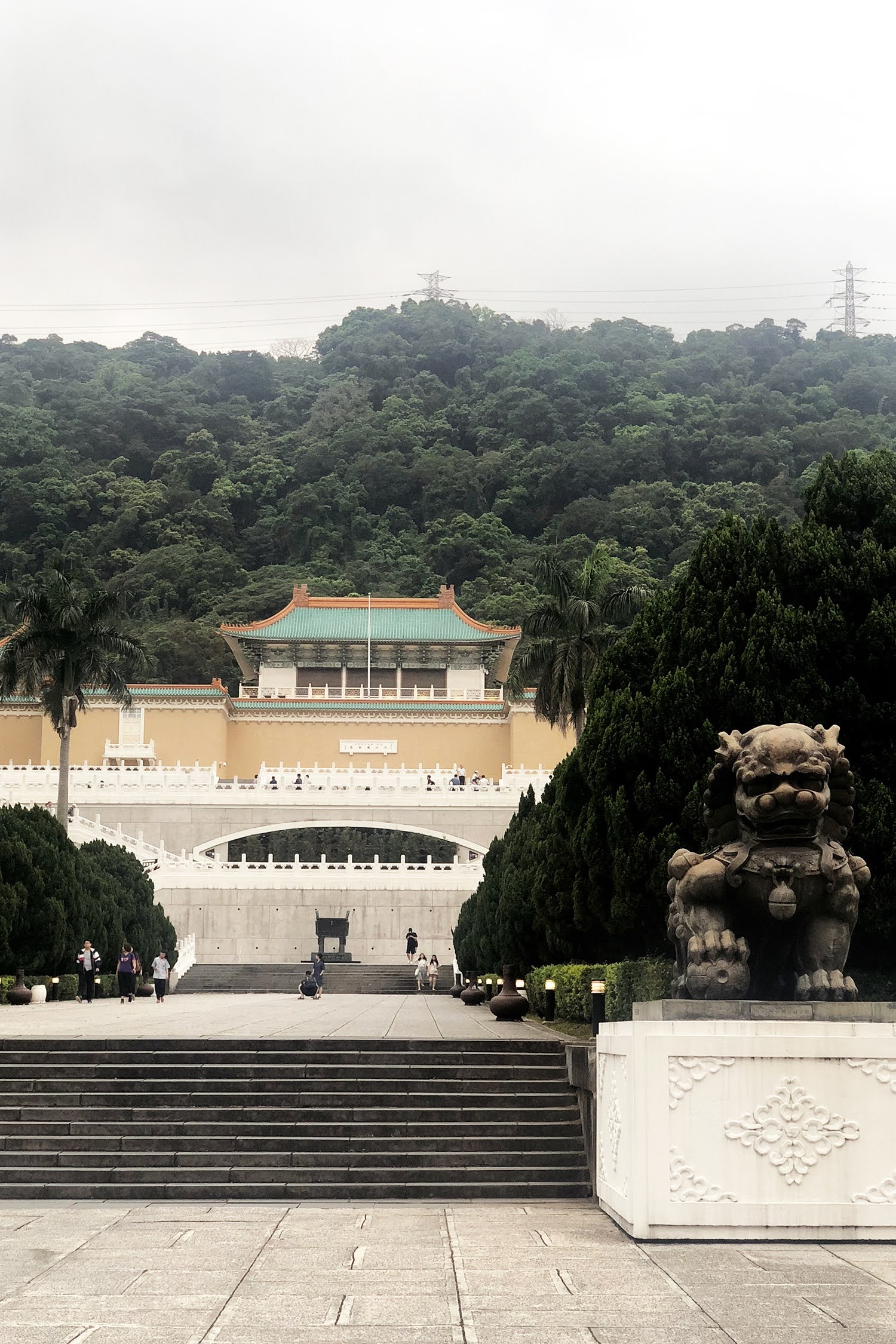 Perched up in the mountains in Shi Lin district, the National Palace Museum has the grandeur of a palace while boasting one of the world’s biggest permanent collections of Chinese cultural and historical artifacts from ancient to modern times. The museum’s history and its future is inherently political. Many of the relics were brought over during the Chinese Civil War when the Republic of China government relocated to Taiwan, and occasionally the collections are still contested. The National Palace Museum has extensive inventories of ceramics, paintings, books, metalwork, carvings and more. Perhaps the most famous one is historically trivial: a piece of jade carved to look like cabbage (not to mention the other popular relic – a stone that resembles braised pork belly). The museum is undoubtedly one of the most important Chinese cultural institutions, and draws in millions of visitors each year. In 2015, a southern branch was opened in Chia Yi.
Ximending 西門町 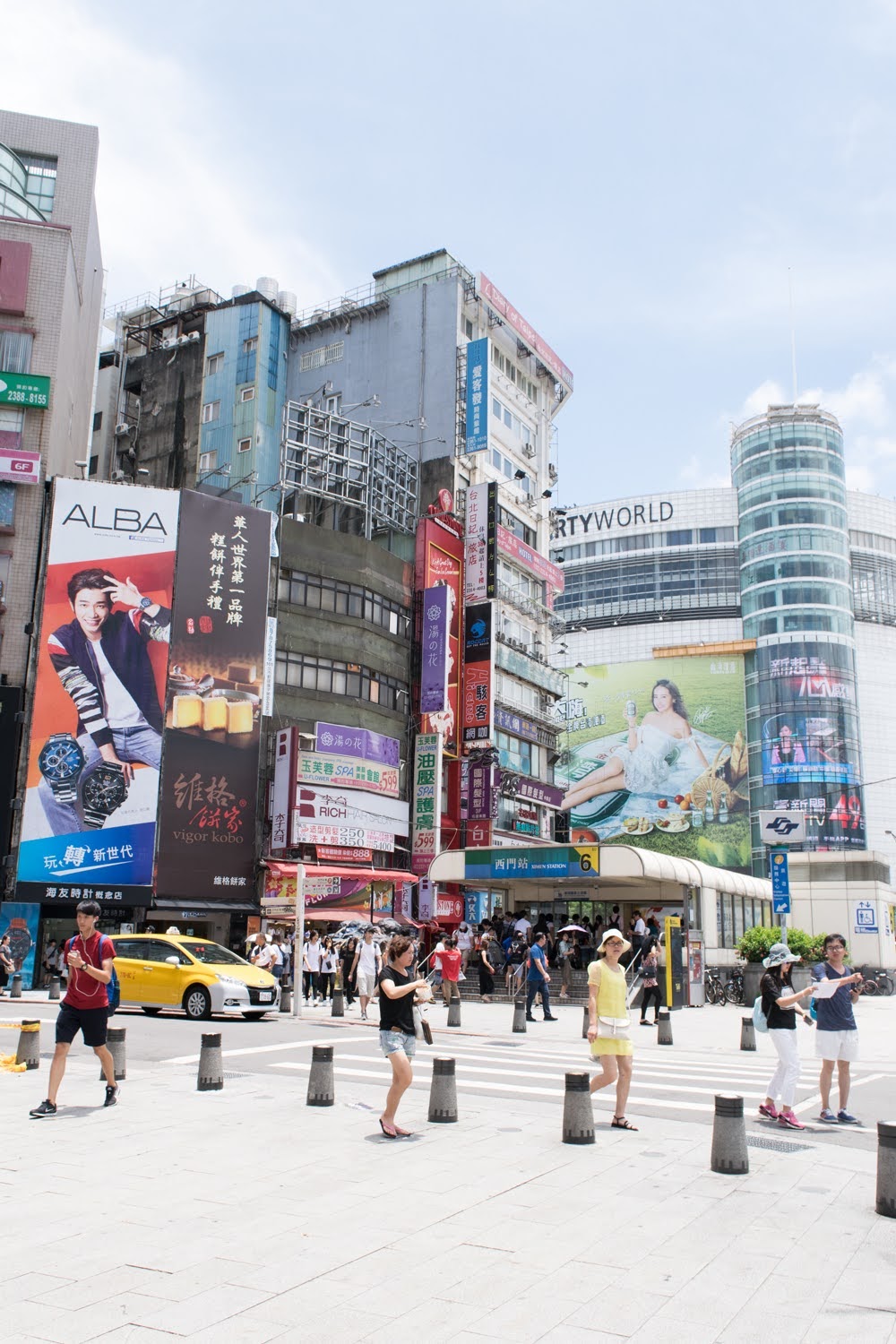 Often compared to Harajuku and Shibuya, Ximending continues to be a popular neighborhood for the hip and happening. Located in Wan Hua district, the shopping area is tailored for pedestrians, with much of it closed off to cars. While it has changed a lot over the years, the fast fashion, street culture and entertainment keep up with the rapidly changing trends and interests of the younger crowd. Like Harajuku and Shibuya, Ximending is sensory overload with neon signs, street performers and street food all competing for your attention. The neighborhood has it all covered, from the latest regional and international shopping destinations (think: giant Uniqlo, giant H&M) to themed restaurants (yes, like the toilet one), from dozens of hair salons to many movie theaters and KTV establishments, the scene comes to life every afternoon and the thousands of vendors maintain an energetic atmosphere late into the night. 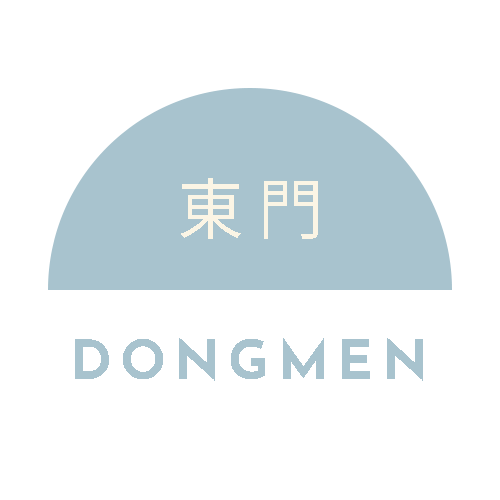 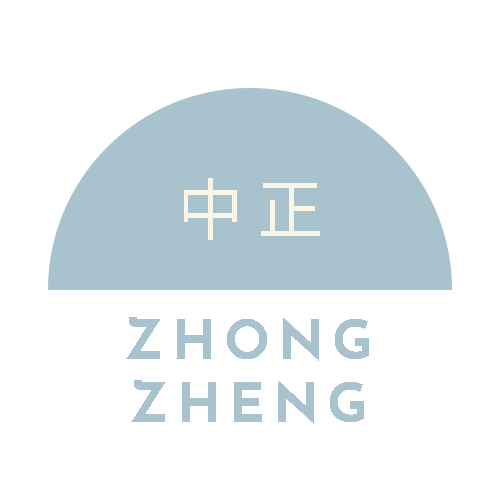 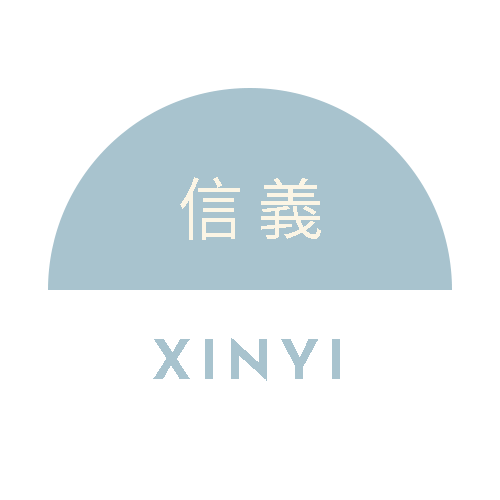 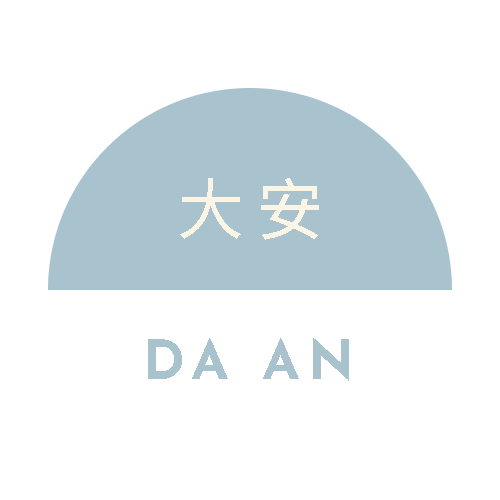 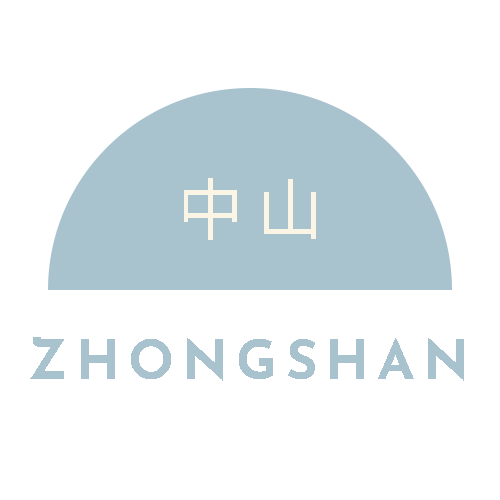 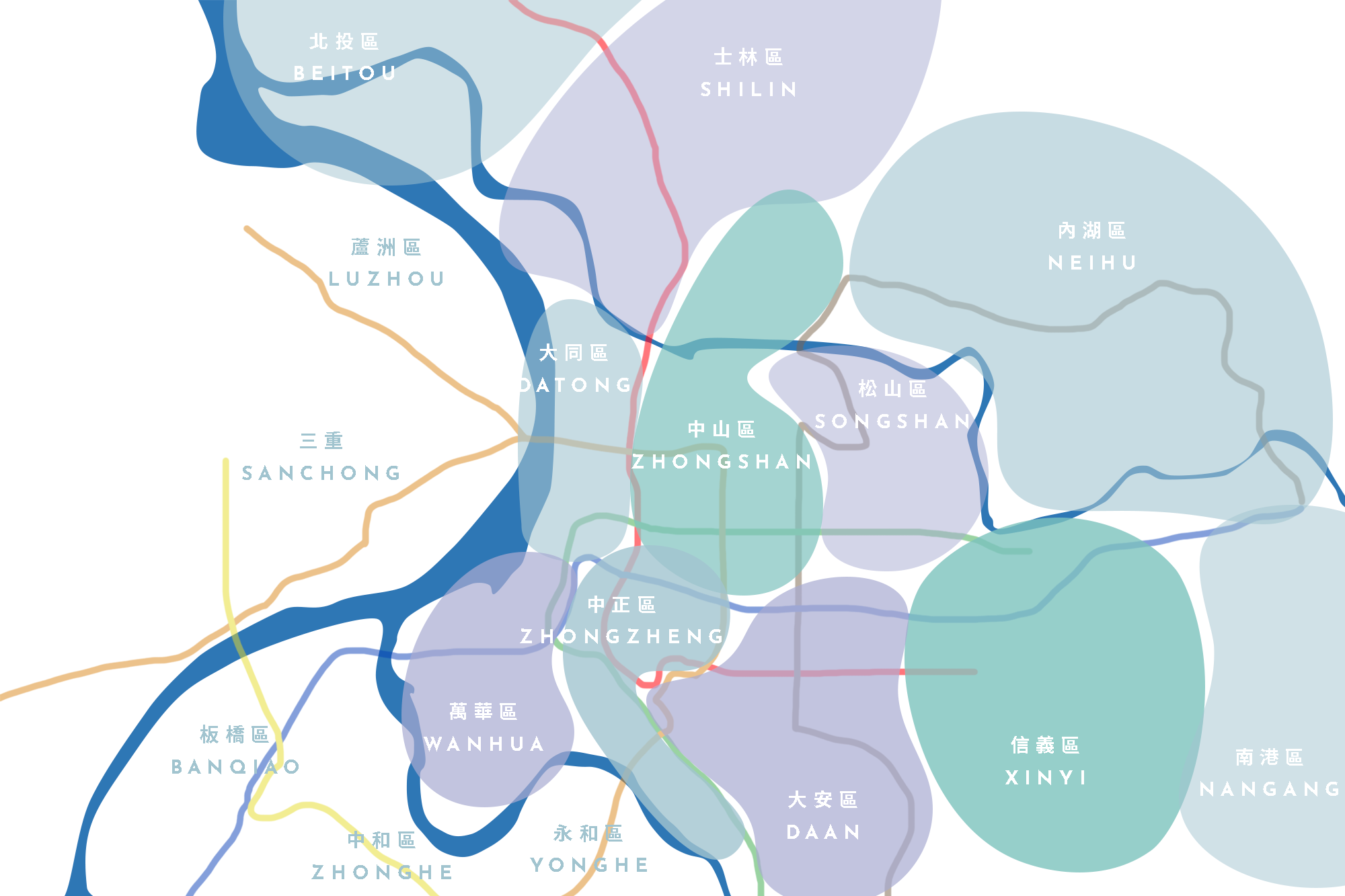 TW Guide | The One 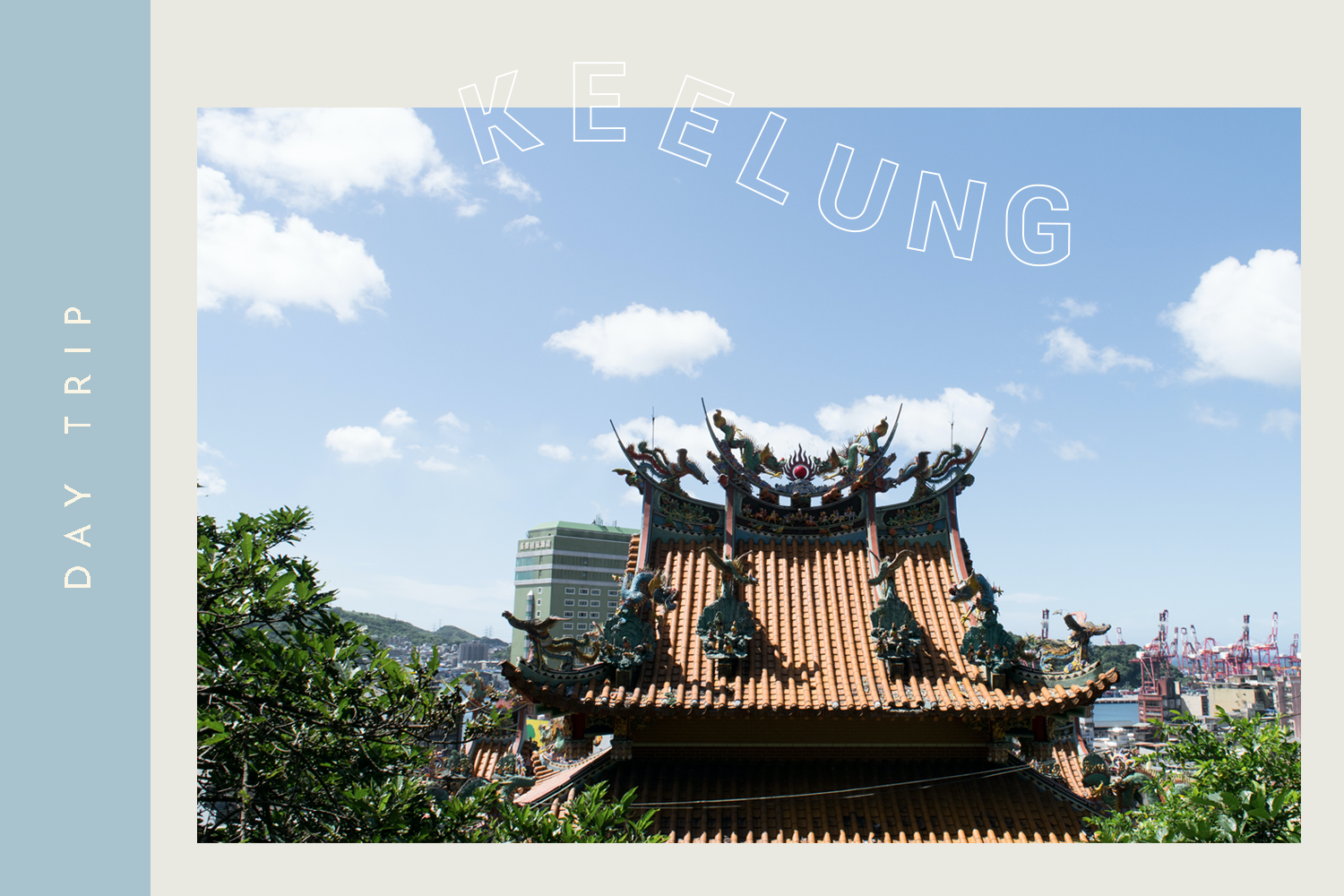